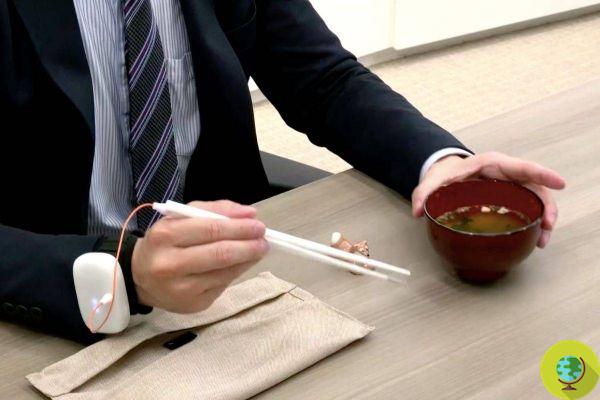 An invention that hopes to limit the consumption of salt in a country, Japan, where the population is used to foods that are too savory and therefore unhealthy

Excessive salt consumption can cause serious health problems - primarily hypertension which, as we know, causes major heart problems such as stroke and heart attack. However, salt is also tasty for our palate and for many to deprive oneself of it represents an impossible challenge to overcome.


The Japanese know something about it, among the first consumers of salt in the world, who season their dishes with very savory sauces (miso and soy sauce), ingesting up to 10 grams of salt daily - more than double the amount of salt recommended by the Organization's experts World Health.

A campaign is currently underway in Japan, promoted by the Ministry of Health, which invites the population to reduce the daily consumption of salt to a maximum of 7,5 grams for men and 6,5 grams for women, to reduce the occurrence of diseases such as hypertension and heart attack that weigh on the national economic balance.

(Also Read: The amount of salt you eat could hurt you a lot more than you think, according to a new study)

An ingenious invention by researchers at the Meiji University in Tokyo goes in this direction: these are traditional chopsticks that have the power to "Fooling" our brain and our palate, making food seem saltier than it actually is. The chopsticks are connected to a mini-computer attached to the eater's wrist and use a weak electric current to artificially amplify the taste of the salt.

In practice, the small wrist computer generates sodium ions that end up in the food (and in the mouth of the eater) through the chopsticks: these ions create a perception of "artificial" sapid, even if the salt is not present in the dish or if it is present only minimally. Clinical tests conducted on people on a low sodium diet have shown that the device improves the flavor of the dish by about 1,5 times.

The invention has been very positively received by the scientific community and by Japanese public opinion, which hopes to solve the thorny problem of excessive salt consumption. the researchers are now perfecting the prototype and hope to market these sticks starting next year.

Goodbye colds and coughs with eucalyptus and thyme tablets for fumigations ❯