You may already know the Panela brand, one of the most famous producers of organic brown sugar. Its notoriety depends above all on the uniqueness of the method of making sugar, which is produced according to ancient traditions and knowledge first in a block and subsequently transformed into granular crystals. It is therefore more raw and 'whole' than normal cane sugars.

You may already know the brand Panela, one of the most famous manufacturers of organic brown sugar. Its notoriety depends above all on the uniqueness of the sugar making method, which is produced according to ancient traditions and knowledge first in a pan and subsequently transformed into granular crystals. It is therefore more raw and 'whole' than normal cane sugars.

Al Sana 2012 we had the opportunity to taste a new product, which actually has been on the market since last year, but which is little known above all because there have been few opportunities for retailers and consumers to test it!

It is about brown coconut sugar, made by palm flowers, Also known as Brown sugar in Bali, name by which it is traditionally called on the Indonesian island. We specify that it is not the palm from which the much discussed oil is extracted but of the coconut palm flowers (cocoa nucifera) which is grown in a non-intensive way in Bali. 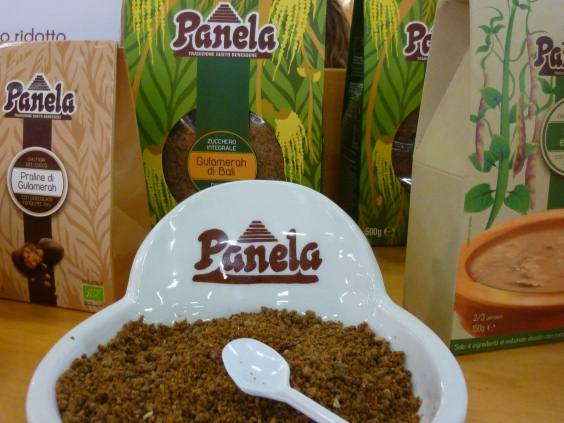 To realize the the flowers are engraved and the sugar secretion is collected and then cooked lightly to obtain a solid mass to be finally modeled in typical Panela loaves. The resulting product is a sugar with an intense and fruity flavor with a reduced sucrose content and which contains many important nutritional substances for our body such as potassium and zinc.

To produce it coconut sugar does not cut or spoil the palms in any way, in addition the production is entrusted to small local farmers, in this way the local economy is encouraged without speculation.

To know where to buy it is possible search here for the nearest point of sale.

- Palm oil: because it is harmful to health and the environment

Sweeteners: they do not make you lose weight and there is no guarantee of safety. The new confirmation ❯