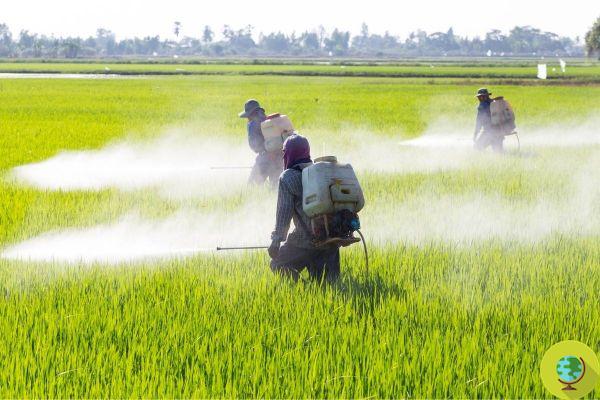 There is a correlation between pesticide exposure and the onset of prostate cancer. This is confirmed by an expert report by Anses

There is a correlation between pesticide exposure and the onset of prostate cancer. This is confirmed by a scientific report by Anses, the French National Agency for Food Safety, Environment and Health at Work, which highlights how insecticides including chlordecone are harmful and risky.


We already told you about the chlordecone. Last November, France was accused of poisoning Martinique in the Lesser Antilles and other suggestive places. Not only compromised soil and water, but also many cases of prostate cancer for farmers and residents of the area. Chlordecone is an insecticide of the same family as DDT, it was banned in 1993 but had been used massively since 1972 as it is particularly effective against a parasitic beetle capable of destroying entire banana groves, one of the main resources of those lands. The molecule, however, is a real poison, an endocrine disruptor recognized, and already classified by the WHO as a possible carcinogen in 1979, with several subsequent studies that indicate the particular danger of exposure to the prostate. But no one had ever warned the unsuspecting inhabitants that using the pesticide would be so dangerous. Now Anses gives further confirmation in its expert assessment of exposure to pesticides in both the agricultural and non-agricultural sectors.

The report concluded that there is a probable causal relationship between the risk of prostate cancer and exposure to pesticides, including chlordecone. The scientific evidence developed in this report can now give the green light to the creation of a list of diseases caused by pesticides.

The experts also examined phytosanitary products, biocides and external pesticides for veterinary and human use starting from an alarming figure. In France, prostate cancer is the most common cancer among men aged 50 and over. It is a multifactorial disease, age and family history certainly affect, but also other factors, especially environmental ones, such as exposure to pesticides.

According to scientists' estimates, chlordecone is responsible for approximately 5-10% of prostate cancer cases in the French West Indies in particular, with between 50 and 100 new cases per year in a population of 800.000 people. Starting from scientific updates and publications, particularly in epidemiology and toxicology, the experts came to the conclusion that workers who are exposed to numerous pesticides and throughout their working life are at very high risk. As well as breeders and residents. Yet to date, prostate cancer is not officially listed as a pesticide-related disease like Parkinson's disease, for example. So it is really complicated for those who get sick to be able to demonstrate the connection of chance.

For this Anses points out that there is all the scientific evidence to establish that pesticides affect the endocrine system and cites in particular, the cultivation of bananas. Chlordecone was, in fact, a substance used in the French Caribbean as an insecticide on banana plantations until it was banned in 1993. It is now the focus of public attention for its effects on health, particularly for workers in the bananas, and for its environmental impact. Following a government request, the latest evaluation of the national chlordecone plan recommended finalizing "procedures for the inclusion of prostate cancer in the list of occupational diseases".

Prostate Cancer: Exposure to PFAS and a high-fat diet increase the risk of cancer ❯