La mucus-free diet was conceived in the early 900s by professor Arnold ehret, eager to understand which diet and lifestyle was the most correct for man, could save him from diseases and lead to a 360 ° well-being. What he has developed after years of research and experimentation, first of all on himself, is the Mucusless Diet Healing System, Also known as Ehretism.


The fundamental basis from which this theory starts is undoubtedly the fact that the body is a perfect machine with the ability to heal itself, of course, if put in the right conditions and supplied with the correct fuel.

The healing for Ehret it is not simply the disappearance of symptoms but "the natural process by which the body repairs itself" therefore the fundamental purpose for resolving one's ailments is to get to the cause that creates them and eliminate it at the root. The organism, in fact, following a healthy diet, is able to eliminate all the toxins and chemical or harmful substances with which it comes into contact, even bacteria and viruses cannot take root if they are faced with a healthy organism.

Ma what then is the cause of our ailments? According to Ehret the mucus. This word, however, is seen in a very broad meaning and includes not only phlegm and intestinal secretions but also other viscous substances that are found inside the body including cholesterol and phlegm (according to the ancient medicine tradition, one of the four fundamental humors of which the organisms were believed to be constituted). It would be the great presence of mucus inside our body, accumulated over years and years of unregulated nutrition, the cause of almost all diseases. These sticky substances, in fact, accumulate inside the colon and then reach the other organs. Among other things deposited on the intestinal walls also make it difficult to absorb nutrients.

Here then comes nutrition, thanks to which it is possible to limit the presence of mucus inside our body. How to do? Need prefer certain foods that help eliminate mucus, limiting to the maximum or rather completely excluding those that lead to its formation. Need therefore consume raw fruit and vegetables (particularly beneficial are figs, grapes, citrus fruits) eliminating flours, rice and animal proteins along with any industrial food (foods that according to Ehret are unsuitable for human consumption). Basically it is one mainly raw food-fruitarian diet. 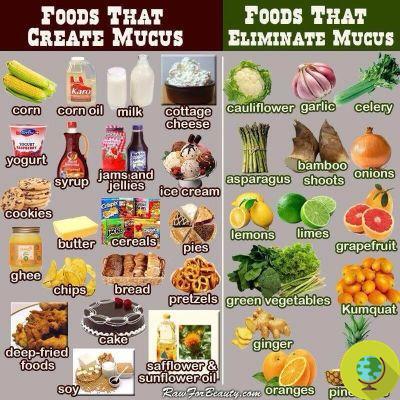 In this way, according to the professor, the body has the possibility to deflate and detoxify and the whole organism will benefit from it in energy and health. Of course, the transition must take place gradually, so Ehret came up with the so-called transition diet which initially allows some cooked food and is useful to slowly accustom the body to feed exclusively on natural foods.

If you want to learn more about the Mucusless Diet Healing System and to know other aspects of the lifestyle proposed by Ehret not contained in this article (including intestinal washing and therapeutic fasting) you can refer to the website www.arnoldehret.com.

We also recommend the book Fructalia where the mucus-free diet was revisited by Silvio Sciurba and Luca Speranza.

- > Do you want to detox? Try the diet of yoga masters

Universal diet: the menu to save health and the planet has been published in The Lancet ❯

There is a new side effect that makes ticks fearful: food allergy even with a single bite

add a comment of Mucus-free diet: what it is and how it works