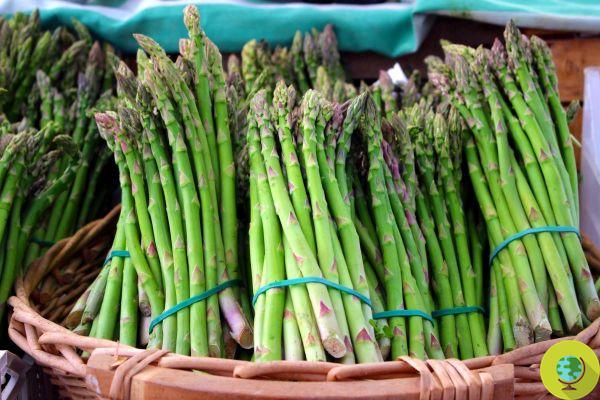 Find out why pee stinks after you eat asparagus. Here are the reasons, explained by science, connected to the sulfur smell of urine.

Find out why pee stinks after you eat asparagus. Here are the reasons, explained by science, connected to the sulfur smell of urine.


THEasparagus, or Asparagus officinalis, is a spring vegetable rich in Vitamins (A, C, E, K and B6), minerals (iron, copper, calcium), proteins e fibers. In addition, the plant possesses medical properties to support kidney functions, the fertility, and in preventing cancer; but the factor that makes it reason for reflection is its ability to give urine a pungent odor.

Asparagus is made up of many compounds, most of which are related to sulfur, such as methaniol and methylene chlorides. Over the years, scientific experiments have been conducted using liquid and gaseous chromatographic methods to find the exact compound responsible for thesmell of urine given by asparagus.

The researchers found that the compound's volatile property (the property by which the compound evaporates at room temperature) aids in the detection of odor. That is, during urination the particular compound comes into contact with the atmospheric temperature and evaporates, reaching the nose and making the smell recognized; despite small volatile molecules, such as methaniol or dimethyl sulfide, they evaporate rapidly during cooking, and therefore will not be able to persist to the point of excretion.

It was found that a more stable compound, namely the "acid asparagus”(1-dithiolane-2-carboxylic acid) and its derivatives are the source of the odor. It is a compound found only in asparagus, and not in other vegetables; the smell it gives to urine is something like the smell of cooked cabbage.

(Read also: Time to harvest the wild asparagus! How to recognize them and cook them best)

The biological mechanism of fragrance

During digestion, as with any food material that reaches the stomach, asparagus also undergoes various mechanical and chemical processes to decompose. This process is catalyzed by complex proteins, called enzymes, and the final products are stored for future use by the body, or transferred to other parties for recycling or immediate excretion.

Here, the asparagus acid, which is a non-volatile compound, is broken down into sulfur volatile during digestion, and then it is transferred into the urine for immediate excretion. That is why, even after the loss of volatile compounds at the time of cooking, asparagus is able to give urine odor.

During urination, sulfur compounds evaporate quickly at room temperature. The vapors rise and at the same time reach the nose, which allows the receptors olfactory to detect the smell. This is a spontaneous process, and therefore people are able to notice the smell even within 15 minutes of eating the vegetable.

Read also: Few imagine that the color of urine can reveal a lot about your health)

Surveys confirm that there are some people who, even after consuming asparagus, are unable to detect thepungent smell of sulfur. The researchers found two different explanations for this:

However, the exact reason for not excreting pungent-smelling urine is unknown; however, it is believed that in people where this occurs, asparagus is digested in such a way that volatile sulfur compounds are not perceptible. In these cases, the offender is deemed to be a gene with two alleles.

There are also cases where some people do not have the ability to smell the compound, even if their urine contains it. Considering the perception of herbstherefore, the population can be divided into smells and non-smells.

Studies have yet to confirm the differences in metabolism of asparagusic acid, considered as a plant growth inhibitor and nematode killer.

add a comment of Why does pee smell after eating asparagus?