Oxfam, Behind the Brands. The major food multinationals active worldwide do not commit enough to maintaining their ethical standards according to the most recent report by Oxfam on the subject, which has been responsible for drawing up a ranking including 10 of the best known brands in the world as regards production of food and drinks, evaluating the strategies actually implemented for the protection of the planet and for the protection of workers.

How ethical are multinationals? We would answer very little without thinking about it. And the extensive dossier drawn up by Oxfarm also reaches the same conclusion.

The major ones food multinationals active globally, they do not make sufficient efforts to maintain their own ethical standards according to the most recent relationship di Oxfam in this regard, which took care of drawing up one standings comprising 10 of the best known brands in the world as regards the production of food and drinks, evaluating the strategies actually implemented for the protection of the planet and for the protection of workers.

Among them we find Nestlé, Unilever, Coca-Cola, Pepsi and Mars, which occupy the top five places in the "Top 10" compiled by Oxfam. Despite being at the top of the rankings, that doesn't mean theirs ethical commitment is to be considered good, much less sufficient. In fact, there are still many efforts to be made, although some improvements have been recorded. In fact, none of the brands appears with the green dot. In short, a ranking of the "least worst".

Associated British Food, Kellog's and General Mills are at the bottom of the rankings, because of theirs commitment judged to be particularly low, especially as regards the protection of the climate and land, as well as respect for the rights of female workers. The central positions of the ranking see the presence of Danone and Mondelez International, also with results that are not at all brilliant from the point of view of ethics.

In compiling the ranking, the companies have been judge on the basis of seven categories relating to the transparency of operations linked to the production chain and to the supply of raw materials, to guarantees for respect for workers' rights, to the policies adopted in defense of women, the use of the land and the water management. In addition to the commitment to reduce one's own impact on climate and respect for farmers' rights that deal with the cultivation of foods used in industrial production cycles. Lacks in the index the parameter linked to the use of animals to test their products. An indicator that certainly would have further lowered the percentage. 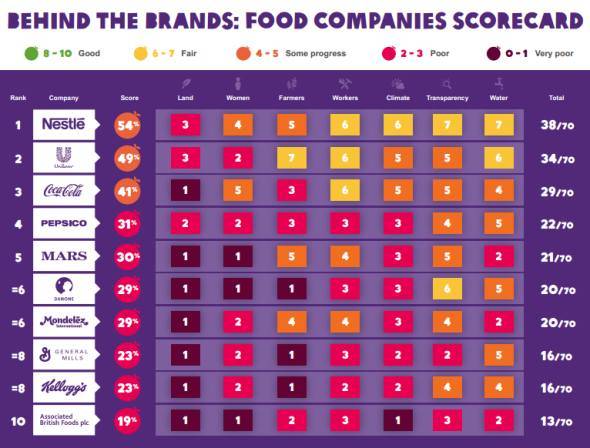 For the last two places in the ranking, occupied by Associated British Food e Kellog’s, Oxfam noted a completely absent concern of the same towards the rights of farmers and women, who should be given more job opportunities. General Mills was unable to provide transparent information regarding the origin of raw materials, with the exception of palm oil.

Oxfam's comment on the overall ranking results is very clear. In words, every multinational is able to recognize the need for a fairer food production system, fair and ethical, and has expressed its willingness to commit itself to this, but unfortunately, as often happens, not enough concrete facts followed the promises and adequate steps, if not minimally. The companies that have reached the top positions cannot therefore certainly be praised and the path to be faced in view of an improvement in respect of the environment and human rights still appears to be very long.

add a comment of Discover the brand: Oxfam gives the report card to the ethics of food multinationals