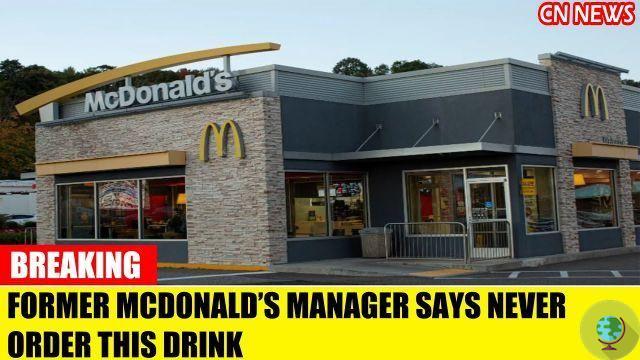 An innocent glass of sweetened tea does not appear to have catastrophic consequences on our health, at least until we actually know how much sugar it contains.

A trip to the fast food restaurant is not complete if it is not accompanied by a nice drink with ice. But do we really know what's inside the glass? In fact, within these drinks exaggerated amounts of sugar are hidden, which we would never imagine.


This is what emerges from the (umpteenth) complaint of a former employee of the fast food giant McDonald's: the woman, Nicole Weiser, worked for three years as a manager in a McDonald's store before quitting her job. Now on her own channel, TikTok shares videos in which she puts the spotlight on the very poor quality of the products sold by the fast food chain and on the damage that these products can cause to the health of consumers.

In particular, he recounted his experience with the tea made available for employees: two large four-gallon jugs each (corresponding to about 15 and a half liters) - one red for sugared tea and one green for the same drink but without sugar. Before discovering the actual amount of sugar contained in the drink, she Nicole indulged in a cup of sweetened tea from time to time during work.

One day, however, she realized that for every four gallons of sweetened tea prepared, four pounds of sugar disappeared from the warehouse - corresponding to almost 2 kg: in practice, in each glass of tea there are 9 teaspoons of sugar! Nicole stopped drinking sugary tea after this shocking discovery and, in her TikTok video, invited all McDonald's customers to do the same.

The video was repurposed on YouTube in a collection entitled Tell me a secret of your company that you can now reveal why you no longer work there, which also contains other "confessions" of former employees of large chains - struggling with abuse at work, scams to the detriment of unsuspecting customers or poor quality of the products sold, as in this case.

The whole collection has been very successful and stimulated numerous comments from customers horrified by the real one amount of sugar and calories obviously not perceived. As one web user wrote, perceiving the sweetness of a food on the palate is different from knowing exactly how much sugar it contains.