Each of us eats 50 particles of plastic a year, and it's the fault of the water bottles 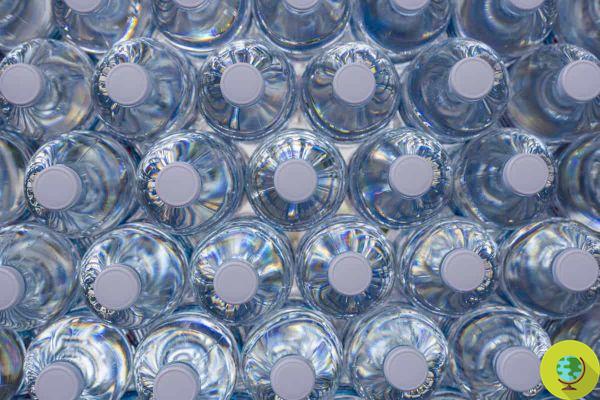 Each person, on average, eats at least fifty thousand particles of microplastic a year and breathes as many, according to the first study aimed at estimating the ingestion of plastic by humans.

Each person, on average, eats at least fifty thousand particles of microplastic a year and breathes as many, according to the first study aimed at estimating the ingestion of plastic by humans.


The main contributor is the habit of drinking bottled water, which contains 22 times more microplastics than tap water. We are talking about 130.000 particles a year, a lot if compared to the 4.000 of tap water.

The new research, published in the journal Environmental Science and Technology, is the result of an elaboration of the data of 26 previous studies that measured the amount of microplastics in fish, crustaceans, sugar, salt, beer, but also in toothpastes. in carbonated drinks and water, as well as contained in the air of cities.

The scientists then used the US government's dietary guidelines to calculate how many plastic particles people would eat in a year, concluding that adults would ingest about 50,000 and children 40,000. And, considering those introduced by breathing, we would arrive at an estimated consumption between 70,000 and 121,000 particles per year.

These estimates, which, according to the researchers, would be even optimistic: the real number would be even higher, given that only a small number of foods and drinks have been analyzed for plastic contamination. And there are still few data referring to the various foods. But even just by drawing on those in possession, the conclusions are truly alarming.

Microplastics have arrived everywhere, they contaminate the food chain and the most worrying thing is that the health effects of their ingestion are not known, especially in the long term. Also because they are so small that they penetrate human tissues and, it is hypothesized, trigger immune reactions.

Smaller than a sesame seed, just a few millimeters in diameter, microplastics come from the disintegration of plastic waste and seem to have become ubiquitous across the planet. From the deepest point, the Mariana Trenches, to the most remote, like the Arctic, from the rivers to the ground, to the air, we are invaded by plastic fragments. They were even found in human stool samples last October, confirming that people inevitably ingest these nanoparticles.

“Human dependence on plastic packaging and food processing methods for major food groups such as meat, fruit and vegetables, is a growing problem, '' said Kieran Cox, PhD student in marine biology in Uvian Francis Juanes' biologist's laboratory and one of the study's lead authors. research suggests that microplastics will continue to be present in the majority, if not all, of items intended for human consumption, ”Cox says. "We need to review our dependence on synthetic materials and alter the way we handle them to change our relationship with plastics."

More research is needed on the levels of microplastics in our foods, particularly in important food groups such as beef, poultry, milk and grains, in order to understand the health impacts and the wider problem of plastic pollution, he adds.

Every drink has its after-effects: the symptoms to expect for every alcoholic, from mulled wine to sparkling wine ❯

add a comment of Each of us eats 50 particles of plastic a year, and it's the fault of the water bottles