Yoga Vs Pilates: Differences, Benefits, and Which One Is Best for You 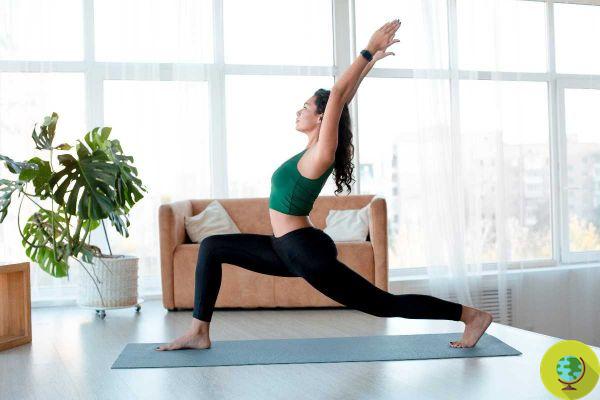 Yoga and Pilates are very similar disciplines, but they have different distinctive elements. Here are all the differences and which one to choose

Yoga and Pilates are very similar disciplines, but they have different distinctive elements. Here are all the differences, the benefits and which one to choose


For both disciplines a mat is used, and both focus a lot on stretching and on deep breathing, we're talking about the Yoga and Pilates two very similar but, at the same time, different activities.

The biggest difference lies in history as Yoga began in India 5000 years ago as a personal development practice, while Pilates was created in the 20s by Joseph Pilates as a form of physical therapy to deal with pain and injury. There is also a spiritual element that distinguishes yoga, which has strong philosophical roots, which are reflected in ancient texts but are not always found in the yoga sessions themselves. The practice is known to promote one holistic lifestyle on and off the mat, while Pilates is more focused on mobilizing the body.

Despite its spiritual foundation, changes are added to Westernized yoga classes to address exercise and fitness goals (think yoga sculpt and at the hot yoga, for example), and it is here that the boundary between Yoga and Pilates begins to blur; in fact, both Pilates and Yoga have many variations and can resemble each other, for example both focus on controlled breathing and can include cardio exercises.

If you are undecided between these two activities, let's find out what the main differences are to understand which one is best for you.

Basically, Yoga is meant to align the mind, body and spirit using postures and controlled and conscious breathing. Typically, a class begins with centering on a mat before going through a series of postures, called asanas. The goal is to combine breathing with movement. Basic postures include the Downward Dog and Baby Pose.

A Pilates class, on the other hand, will focus on specific movements and controlled breathing with the aim of strengthen and align the body and improve flexibility. While both Pilates and yoga encourage you to focus on how your body feels so that you stay present in the moment, Pilates focuses more on the spine and body.pelvic alignment, as well as on major muscle groups such as the buttocks and core; and sometimes incorporates equipment you won't find in a yoga session. Classes tend to include mat-based exercises and stretches, but it is also possible to use specific tools during a Pilates session, such as the Reformer bed.

Another difference is that a Pilates workout keeps you in constant motion, while some variations of yoga make you hold a pose for some time. Also, in Pilates there is a strong focus on building strength and stability in the abdomen and spine.

The benefits of yoga

When you go to a Yoga class or watch a video, you can expect to feel a little less stressed at the end of your workout. Mentally, yoga can induce a state of calm and awareness through the continuous return to the breath and its sensations. It can also help reduce symptoms of depression, anxiety and stress.

Though it can be slow and gentle, yoga will always be a good workout. The physical practice of yoga is tantamount to stretching, building muscle, and increasing flexibility, while from a fitness perspective, yoga can be high-impact or low-impact, depending on the style and pace of the class.

What you get from this discipline really depends on your goals and the type of yoga you try; for example, if you are looking to increase strength and flexibility, try the Vinyasa or power yoga, or another style like theAshtanga. If you're looking to improve stretching, relax, or spend a day of active recovery, explore restorative yoga. Then there are lessons of Yoga sculpture, which add resistance training and sometimes even weight lifting during the workout session.

The benefits of Pilates

Pilates isn't necessarily a spiritual practice, but it sure does have some mental health benefits. On a psychic level, in fact, it creates more emphasis on the mind-body connection and a better sense of awareness and control. Physically, you can also expect to see some results in your abs and other muscle groups. The movements, in fact, target specific muscle groups, and are repeated while breathing is controlled to help improve endurance.

After a couple of classes, you can expect to feel stronger, more aligned, and more flexible. Remember, Pilates was designed with physical therapy in mind, so it's meant to help the body move as efficiently as possible; Plus, it's also a great way for anyone with an injury or joint problem to exercise without adding extra stress to their body.

So in the end both Yoga and Pilates offer a gentle way to train muscles, focus on breathing and increase strength, using only the body and a mat.

Yoga, the best way to have an iron abs: the 8 most effective asanas for a flat stomach ❯

add a comment of Yoga Vs Pilates: Differences, Benefits, and Which One Is Best for You