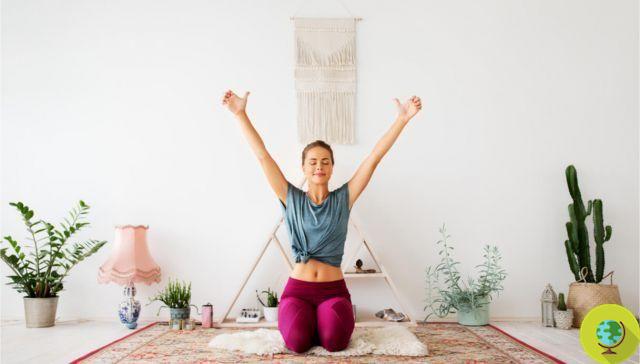 Kundalini Yoga, also known as Laya Yoga, is a school of Yoga whose name derives from the focus on awakening the kundalini, the latent energy that lies at the base of our spine. What's it about? What are the benefits?


Have you ever heard of the Kundalini Yoga? Kundalini Yoga, also known as Laya Yoga, is a Yoga school whose name derives from the focus on awakening of the kundalini, the latent energy that lies at the base of our spine.

According to this Yoga style kundalini energy awakens through the practice of asanas, breathing exercises (pranayama), regular meditation practice and chanting of mantras. The Kundalini Yoga it is sometimes also called Yoga of awareness and aims to cultivate the creative and spiritual potential of the human being.

The style of Yoga that has been known since the early 20th century as Kundalini Yoga has its roots in Hatha Yoga, with particular reference to Patanjali, in ancient techniques of meditation and in other techniques oriented to the awakening of the kundalini.

Among the reference texts of Kundalini Yoga we find Hatha Yoga Pradipika and Shiva Samitha, which indicates to the students of the school of Kundalini Yoga to contact both to practice of asanas typical of Hatha Yoga, both in the recitation of mantras and in the techniques for awakening the kundalini.

In the twentieth century, Kundalini Yoga arrived in the West first thanks to Swami Sivananda and then with Yogi Bhajan, who introduced his own version of Kundalini Yoga in the United States starting in 1968. Yogi Bhajan synthesized a new form of Kundalini Yoga drawing inspiration from the techniques and asanas of Hatha Yoga, from Tantric Yoga and from the mantras of the Sikhs.

The influence of Yogi Bhajan and his Kundalini Yoga has grown over the past decades both in the United States and in Europe and Asia.

Through sound, mantras, breathing and postures, Kundalini Yoga aims to develop the spiritual awakening starting from the path taken by the Kundalini from the first chakra which is located at the base of the spinal column up to the seventh chakra, which is located on the top of the head.

There are many benefits attributed to the practice of Kundalini Yoga: makes you stronger and energetic, improves breathing, promotes digestion, encourages willpower, helps to overcome bad habits, purifies the body and contributes to the elimination of toxins, particularly through purification techniques called kryya, and thanks to the practice of the positions makes the body more agile and flexible.

Kundalini Yoga draws on Hatha Yoga as regards the practice of positions and inserts different exercises aimed at awakening of potential energy present in each of us, both physically and spiritually.

Kundalini Yoga: the position of the frog

Among the asanas of Kundalini Yoga we find the position of the frog. In this video Carol, Kundalini Yoga teacher at the Samsara Huesca center explains and shows how to practice the frog position by combining movements and breathing.

Kundalini Yoga: the breath in one minute

Kundalini Yoga: exercises and positions for the spine

In this video you will find a series of exercises and poses designed to help loosen the spine and to work on the dorsal area, on the lumbar area and on the cervical area to involve the whole spine.

Thanks to this video you can follow one online introductory lesson of Kundalini Yoga (in English) to find out how poses are performed and how breathing techniques are used.

Have you ever taken a Kundalini Yoga class? How did you find yourself?

YOGA: HERE'S HOW IT TRANSFORMS BODY AND MIND FROM THE FIRST LESSON ONWARDS

10 REASONS TO PRACTICE YOGA (INCLUDING SEX)

YOGA AND MEDITATION IN NATURE: ALL THE BENEFITS OF PRACTICE IMMERSED IN THE GREEN

L-theanine: what it is, what it is used for, benefits and side effects of the amino acid in green tea ❯