Winter depression: causes, symptoms and how to overcome it

In technical terms it is called SAD, seasonal affective disorder, but to better understand it we can talk about winter depression, a condition that can appear during the cold months thanks to short days, cold and bad weather. Let's find out how to recognize and face it.

In technical terms it is called USA, seasonal affective disorder, but to understand each other better we can talk about winter depression, a condition that can appear during the cold months thanks to short days, cold and bad weather. Let's find out how to recognize and face it.


In autumn and winter, in addition to feeling more tired and drained, we may also notice a change in mood, low motivation and listlessness in our common activities or the appearance of a real depression (winter blues) which can make the days long and difficult. at least until the climate and the season change. But why does this happen?

Causes and Symptoms of Winter Depression

Our natural rhythm in winter is severely tested by the lack of light. It is as if the biological clock somehow goes wrong. There are several biological systems involved in this process, including some of the major neurotransmitter systems found in the brain that are associated with the motivation, energy, and organization of our circadian rhythms.

For example, serotonin levels tend to decrease due to low sunlight. Some research has shown how the production of this substance can be directly modulated by light. In particularly sensitive individuals, serotonin levels in the brain are reduced in the fall and winter to an extent that increases the likelihood of a depressive episode.

There is a theory that believes that winter depression is related to our evolution and the behavior of our ancestors who during the winter put in place a sort of "energy conservation", as defined by Professor Robert Levitan of the University of Toronto who stated:

“Ten thousand years ago, during the Ice Age, this biological tendency to slow down during the winter was useful, especially for women of reproductive age, as pregnancy requires a great deal of energy. But now we have a h24 company, we are expected to be active all the time and it's annoying ”.

This would also be the explanation of the fact that the phenomenon is more frequent in adult women (80% of people suffering from SAD are women).

But what are they the symptoms of SAD?

In severe cases, you may also have frequent thoughts of death or suicide.

Fortunately, more often it appears in a mild or moderate condition, i.e. people in autumn and winter experience some of the aforementioned symptoms but do not have real clinical depression. 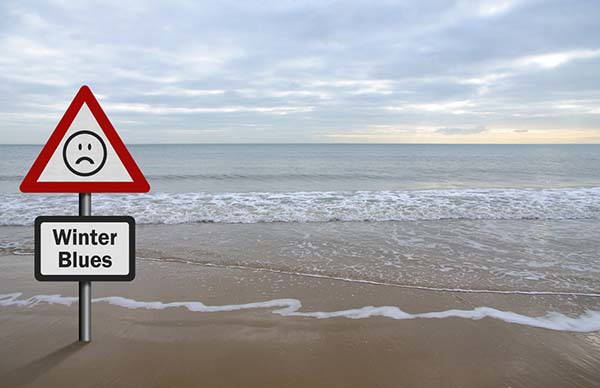 How to overcome the winter blues

Since in this specific case the problem is basically the lack of sunlight, it would be good in the central hours of the day, at least when the weather is good, to spend time outdoors, better if immersed in nature. Fresh air also helps you feel alive and connected to the world.

If you really don't have the opportunity to go out, you can use artificial lighting for at least 30 minutes a day as an alternative. This is the so-called light therapy, an artificial means able to stimulate the neurotransmitters of the brain through a filtered ultraviolet light specific for people with Sad.

Even with nutrition we can help ourselves by eating foods such as dark chocolate and following a diet very rich in vital and energizing foods. Better to stay away from candy and refined carbohydrates instead.

A cheerful music listened to at home but also in the workplace can help fight depression but even better, for those who have the opportunity, organize a winter holiday in sunny and warm places in order to recharge a little.

Of course, if the symptoms are very serious or persist beyond the seasons, it is good to consult a specialist.

Depression: in winter it increases especially among women ❯

add a comment of Winter depression: causes, symptoms and how to overcome it