Chlamydia is a sexually transmitted infection. Let's find out what caused it, what symptoms it entails, the possible consequences and remedies to treat the problem.

La Chlamydia it is a sexually transmitted infection. Let's find out what caused it, what symptoms it entails, the possible consequences and remedies to treat the problem.


Among the sexually transmitted infections, together with Trichomoniasis and Gonorrhea, Chlamydia is undoubtedly one of the most frequent. It affects both men and women but the latter have statistically more chances of contracting it and the possible consequences are also greater.

Even the pregnant woman, infected at the time of delivery, is able to pass the infection to her baby who in that case can see symptoms such as inflammation of the eyes and lungs appear.

There are undoubtedly some risk factors for the transmission of this disease including:

Chlamydia often causes very slight symptoms to appear and in some cases the person does not even realize that he has contracted it, it is therefore completely asymptomatic (this happens even in 70% of cases for women and in 50% for men). It is no coincidence that it is called a "silent sexually transmitted infection".

What at first glance might seem an advantage, in reality it is not especially so in the case of women, since not recognizing it and therefore treating it can lead to even dangerous consequences (see below).

If they appear, symptoms in women include:

Symptoms that can occur in men are:

Generally the symptoms present 1 to 3 weeks from the moment of infection. 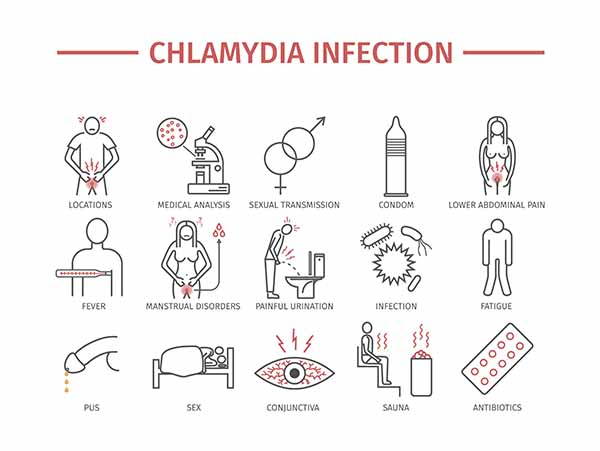 Chlamydia is diagnosed very simply by carrying out a vaginal swab or through a specific urinalysis. If it is positive, the partner will also have to do the same tests to assess a probable contagion.

Obviously, to avoid the risk of transmission, it is necessary to act at a preventive level on one's sexual sphere and through specific screening. The use of condoms greatly reduces the risk of infection while screenings can help identify the disease, even if asymptomatic, in order to promptly initiate treatment avoiding possible serious consequences.

Annual screenings are recommended for sexually active women (especially under 25, as the peak incidence is around 20), those who frequently change partners and pregnant women.

It can be found in the presence of chronic pain, caused by occlusion and inflammation of the tubes, and it is possible to incur in ectopic pregnancies. Furthermore, women infected with Chlamydia have a greater chance of contracting the HIV virus (5 times more than healthy people).

In men, the possible consequences are much rarer but still involve infertility, sterility or Reiter's syndrome, a form of arthritis accompanied by injuries to the skin and inflammation of the eyes and urethra.

Chlamydia infection is currently one of the main causes of couple infertility.

Since the cause of chlamydia is a bacterium, the only way to defeat it is to take special antibiotics by mouth that must be prescribed by the doctor. Since these drugs also destroy the good bacteria present in our intestine, remember to always accompany them with probiotics useful to restore eubiosis.

There are no effective natural remedies for chlamydia although it may be important to act on the immune system in such a way that it can better defeat the bacterium that has infected the body.

Cytomegalovirus: symptoms, causes and why it is dangerous in pregnancy ❯

add a comment of Chlamydia: causes, symptoms, consequences and remedies