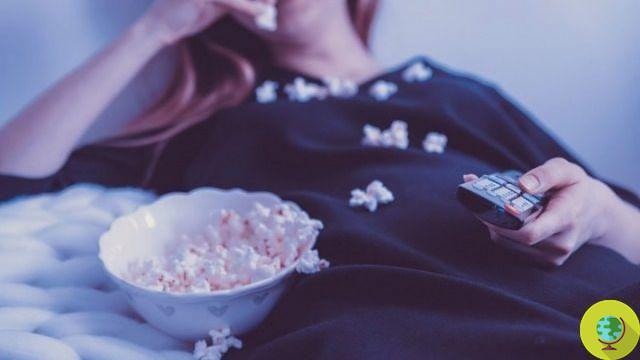 If you have a habit of sitting or lying on the sofa for a long time watching TV every day, you should stop immediately. This way of doing, in fact, puts you at serious risk of developing potentially fatal blood clots.

If you have a habit of sitting or lying on the sofa for a long time every day a watching TV you should stop immediately. This way of doing, in fact, puts you at serious risk of developing blood clots potentially fatal.


According to research conducted at Larner College of Medicine at the University of Vermont in Burlington and presented at the scientific sessions of the American Heart Association (California), watching too long TV increases the risk of blood clots which becomes almost double (precisely greater 1,7 times) compared to people who do not have this habit.

To get to this point, the researchers asked over 15 participants aged 45 to 64 about how often they watched TV and compared their responses to risk factors for blood clots. Thus it was seen that those who spent many hours a day in front of the television had much greater risks than those who had declared that they watch TV "never or rarely".

Of course, the problem is not so much the television itself as the fact that you spend a lot of time sitting in complete sedentary lifestyle and this can trigger a condition known as venous thromboembolism, which usually affects the legs or arms but is particularly dangerous as it can cause clots to enter the lungs and generate a pulmonary embolism which can lead to death.

It is therefore important to keep physically active every day since, as the US researchers have pointed out, physical exercise reduces the risk only if it is done regularly. In addition to avoiding spending too much time watching TV, the risk of blood clots can also be reduced by maintaining a healthy weight.

If you really can't give up on TV, the experts suggest, at least put an exercise bike or treadmill in front of you and pedal, walk or run while watching your favorite shows. Or you can delay viewing for 30 minutes while taking a walk, recording the movie or program you want to see and watching it later, saving at least advertisements.

About blood clots and their possible consequences you may also be interested in:

The advice to keep the TV off as much as possible to dedicate ourselves to healthier activities and also to set a good example for our children remains valid!

Healing the 5 emotional wounds by acting with the heart ❯