The 5 natural antibiotics that are good for our health 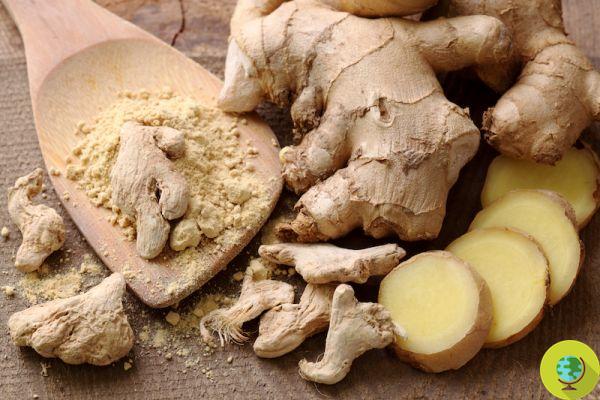 Right at the end of this month of January, according to what TV and media transmit to us, seasonal flu will reach its maximum peak and, given the increase of bacteria more and more resistant to all types of medicines, what better choice than that to resort to remedies coming directly from nature? In fact, it cannot be denied that when it comes to antibiotics and antibacterials, natural medicine really shines.

Right at the end of this month of January, according to what TV and media transmit to us, seasonal flu will reach its maximum peak and, given the increase of bacteria more and more resistant to all types of medicines, what better choice than that from to resort to remedies coming directly from nature? In fact, there is no denying that when it comes to antibiotics and antibacterials, natural medicine really shines.

Always available and effective, to prevent and treat any infection and bacterium, herbs and plants they are for the most part safe and moreover without side effects. Herbal preparations, decoctions and infusions can be used as an alternative to traditional medicines for all those who want to limit or reduce the use of chemical antibiotics.

So here is the detail 5 natural antibiotics, to face colds, fevers but also bad bronchitis typical of this cold time of year without fear.

One of the herbs most used in the kitchen thanks to its particular scent, to enrich the flavor of meat, fish, vegetables, soups, stews and salads,oregano is actually particularly valuable to our health as well, thanks to its countless therapeutic properties. In fact, this plant typical of the Mediterranean, by virtue of its active ingredients such as i phenols, proteins, minerals and vitamins of which it is a good source, it is a great remedy if used which one analgesic, antiseptic and antispasmodic. In particular, lhe essential oil of oregano is the most powerful antiseptic of all the oils known so far, and is active against all viral forms. Recent studies have shown that it is capable of killing almost all common bacteria such as it staph. Precisely for this reason it is widely used inaromatherapy to treat respiratory problems, fever, bronchitis, cough but also asthma, toothache, vaginitis, rheumatism, food poisoning and if that were not enough it is also an excellent remedy for cellulite. Obviously, the higher the concentration, the higher its effectiveness as a natural antibiotic, so try to choose an organic essential oil and above all as pure as possible.

Used since ancient times as a medicine, the extract of olive leaves is still today one of the most powerful antibiotics that nature offers us. Not only antibacterial, anti-myotic, anti-aging, anti-inflammatory, but the liquid extracted from the fresh leaves of the olive tree also seems to have antioxidant capacity and therefore helps protect the body from free radicals. Some research on olive leaf has shown it to be particularly effective in treating certain cancers of the liver, prostate, colon, skin and breast. A miraculous extract, therefore, used a lot by alternative medicine such as remedy to fight simple colds but also more serious diseases such as tumors, or to reduce cholesterol and improve blood circulation and therefore reduce the risk of heart attack.

The king of natural, antifungal, antiviral antibiotics, garlic should be added to the diet on a daily basis, especially at this particular time of the year. In fact, garlic contains potassium and germanium, two essential minerals for good health, and in particular theallicin which not only gives garlic its strong smell but also most of its properties, which help us to increase immune defenses and therefore that act as natural antibiotics. So even for those who prefer to avoid it, make a little effort and start adding to your dishes, a nice and consistent sprinkling of obviously fresh garlic, and always without exaggerating.

Used in traditional Chinese and Indian medicine for many of its healing properties, green tea continues to be revered today by many doctors, but is also often the subject of studies aimed at discovering all its actual health benefits. One of the main properties of green tea is that it is a important natural antioxidant, thanks to the catechins contained in it and in particular the epigallocatechin gallate (EGCG) very effective against some strains of bacteria but above all able to increase the antioxidant defenses and therefore to generally improve cellular tissue. Various tests carried out on regular green tea drinkers have shown that these have a lower risk of developing cardiovascular diseases but also cancer and cancer. Also, drinking green tea daily helps you lose weight. This is because thanks to its thermogenic properties it promotes the oxidation of fats, as well as the stimulation of metabolism but without affecting the cardiovascular system. So drinking at least one cup of green tea a day is good for our health, but it would seem better to enjoy this precious natural drink, at least without the addition of milk (soy is allowed as it does not inhibit the properties of tea).

Ginger, a medicinal plant belonging to the Zinziberaceae family, is native to eastern Asia. From Hippocrates to Confucius, up to the present day, it has been used in many cultures of the world. Recent studies have identified it in ginger one of the ten foods with the highest levels of anti-cancer activity. In fact, it would have a protective function against cancer, in particular that of the colorectal. In addition, it is able to heal numerous common ailments. Starting with colds and flu thanks to his fleshy rhizome that contains active ingredients such as zingiberene, gingerols and shogaoli,resins e mucilage able to dissolve mucus and free the bronchi. To take advantage of the beneficial effects of ginger should be taken in an amount between 10 and 30 grams per day. You can prepare a syrup by boiling it fresh for 30 minutes in a cup of water adding sugar or honey, or throw yourself headlong into the preparation of a disinfectant and invigorating herbal tea such as the one based on ginger, cinnamon and cloves on a basis of bancha tea. .

Read also Ginger, all the properties and tricks to enhance its benefits

The 40 "sugar-free" products that do have it: the Altroconsumo list ❯