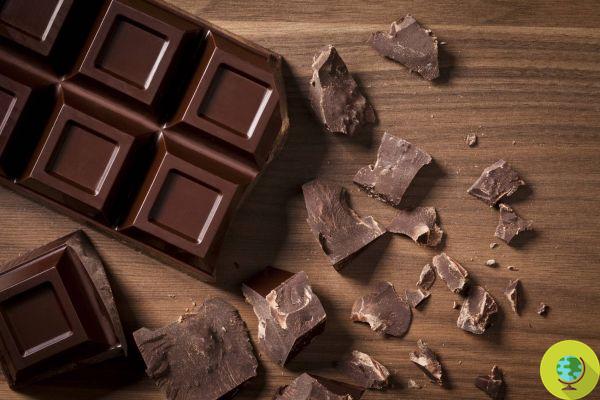 A study analyzed 30 different brands of chocolate sold in Brazil and the United States and found cadmium and lead levels that are particularly dangerous for children.

The health benefits of moderate consumption of dark chocolate they are now well documented in the scientific literature and we have talked about them several times. Now, however, a new Brazilian study casts a shadow over the much-loved chocolate by claiming that the one marketed in Brazil contains worrying amounts of lead and cadmium.


The examination of chocolate was carried out by a team of scientists from the University of Campinas in Brazil and has seen its publication in the pages of the Journal of Agricultural and Food Chemistry. Thirty different brands of milk, dark and white chocolate were analyzed, products sold across the globe Brazilian territory and, some of them, even in the United States.

The researchers tested each product for both heavy metals which, as we know, can cause damage to health of different kinds and are particularly dangerous for children (which among other things are the highest consumers of chocolate). The discovery was bitter: many of the samples analyzed contained high levels of lead and cadmium whose presence the researchers believe is due to contaminated soil on which cocoa beans were grown.

The tests showed that some chocolates, in particular those with higher concentrations of cocoa, contained higher lead levels at the Food and Drug Administration (FDA) recommended safety level of 100 nanograms per gram (ng / g) of product. Different situation for white and milk chocolate, which contain more sugar than cocoa, had lower levels of heavy metals.

Therefore, according to this research, the most dangerous is precisely the chocolate considered healthier and more beneficial, that is, the dark one!

Too much sugar shortens life ❯

add a comment of Found cadmium and lead in Brazilian chocolate