Green tea, all the amazing benefits backed by science 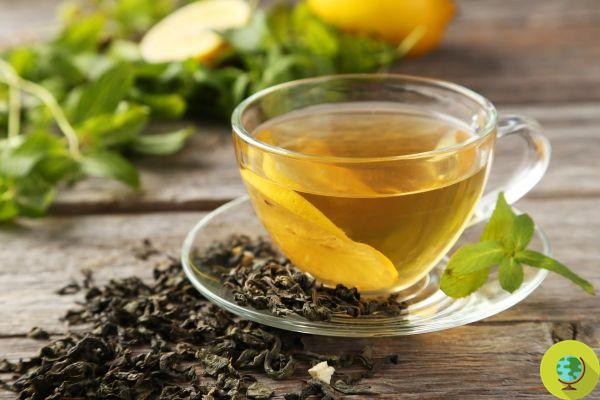 Green tea is more than just a drink. It offers many health benefits also confirmed by scientific research

Green tea is much more than just a drink, it can be considered a real natural medicine. The populations of Japan who have used it for centuries had already guessed it, but in recent years its properties have also been confirmed by many scientific researches that have consecrated green tea as one of the healthiest drinks on the planet.


It can be enjoyed both hot (or warm) and cold and is perfect for all seasons. Green tea also goes well with other ingredients, for example a little lemon juice which also amplifies its beneficial effects. In this regard, read also: The simplest trick in the world to make your green tea even healthier

Its preparation is simple and immediate: pour one or two teaspoons of tea leaves into a cup of boiling water, let it rest for five minutes, filter, let it cool and sip.

But let's go back to the many benefits of this drink, confirmed by the most recent scientific research. Here are the main ones.

Green tea is rich in polyphenolic antioxidants, including a catechin called Epigallocatechin gallate (EGCG). These antioxidants can have several beneficial health effects, including reducing inflammation and helping fight cancer.

The action of antioxidants is particularly useful in reducing the formation of free radicals in the body, protecting cells from damage caused by these molecules that play a role in aging and many types of diseases.

EGCG is one of the most potent compounds in green tea, and research has shown its ability to help keep various diseases at bay, including cardiovascular and metabolic diseases.

Green tea contains less caffeine than coffee but enough to produce a certain stimulating effect without affecting the nervous system (often associated with too much caffeine).

Research has consistently shown that caffeine can improve various aspects of brain function, including mood, alertness, reaction time, and memory.

Not surprisingly, many people report having more stable energy and being much more productive when drinking green tea rather than coffee.

Increase the combustion of grassi

Green tea is considered a beneficial ally against obesity and extra pounds. If we look at the list of ingredients of many so-called "fat burning" supplements we might notice that green tea is often present.

This is because, according to some research, green tea can boost fat burning and boost metabolic rate. For example, there is a study, conducted on 12 healthy men, which showed that green tea extract is able to increase fat oxidation by 17%, compared to placebo.

However, some green tea studies have shown no increase in metabolism, so the effects may depend on the individual or how the study was set up. There is therefore still to be explored regarding this benefit.

It can reduce the risk of some cancers

Research has shown that oxidative damage can lead to chronic inflammation, which in turn can lead to serious diseases such as tumors. However, antioxidants, as already mentioned, can help protect against oxidative damage. Here then is that green tea proves to be a precious ally also against tumors.

Scientific research has linked green tea compounds to a reduced risk for certain types of cancer:

Many observational studies indicate that green tea drinkers are less likely to develop different types of cancer, but more research is needed to confirm these effects.

It can protect the brain from aging

Green tea, as already mentioned, can improve brain function in the short term but not only that, it can also protect this very important organ from aging.

Green tea is a natural antibacterial. Its action mainly affects the mouth and teeth. Some substances contained in green tea are able to counteract the action of one of the bacteria present in the oral cavity, Streptococcus mutans.

Scientific studies have confirmed that catechins can inhibit the growth of oral bacteria in the laboratory, but no evidence shows that actually drinking green tea has similar effects. However, there is some evidence that green tea can help reduce bad breath.

It can help prevent type 2 diabetes

Research conducted in Japan found that those who drank the most green tea had an approximately 42% lower risk of getting type 2 diabetes.

According to a review of 7 studies, however, carried out on a total of over 286 thousand people, those who drank green tea had an 18% lower risk of diabetes.

It can help prevent cardiovascular disease

Cardiovascular disease, including heart disease and stroke, are the leading causes of death worldwide. Studies show that green tea can improve some of the major risk factors for these diseases, including total and LDL (bad) cholesterol levels.

Green tea also increases the antioxidant capacity of the blood, which protects the LDL particles from oxidation.

Given the beneficial effects on risk factors, it is not surprising that according to some studies, people who drink green tea have up to a 31% lower risk of dying from cardiovascular disease.

According to experts, drinking a cup of green tea a day is enough to protect yourself from the risk of stroke.

Read also: Green tea and coffee to ward off the risk of stroke

It can help you lose weight

Given that green tea can boost your metabolic rate in the short term, it makes sense that it can help you lose weight as well. Several studies show that this drink can promote the reduction of body fat, especially in the abdominal area.

One such research was a 12-week randomized controlled trial involving 240 people with obesity. In this case it was found that those in the green tea drinking group had achieved significant reductions in body fat percentage, body weight, waist circumference and belly fat compared to those in the control group. .

However, some studies do not show a statistically significant increase in weight loss with green tea, so researchers need to perform further studies to confirm this effect.

It can help you live longer

Given that some compounds in green tea can help protect against cancer and heart disease, it goes without saying that this drink could help you live longer.

In one study, researchers sampled 40.530 Japanese adults over the age of 11 noting that those who drank more green tea (5 or more cups per day) were significantly less likely to die during the study period.

With all of this in mind, we should seriously consider drinking green tea more often.

add a comment of Green tea, all the amazing benefits backed by science