Vegan diet: proven benefits, examples, what to eat and CONTRAINDICATIONS 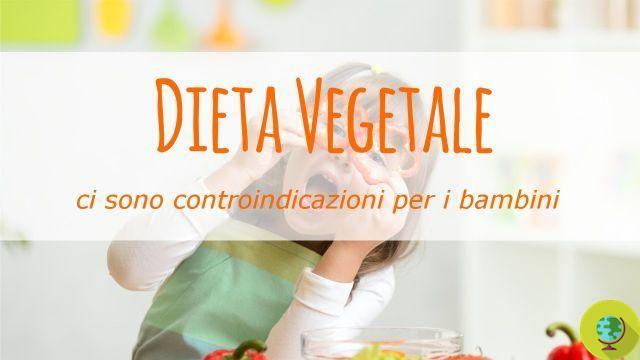 Vegan diet. It is talked about more and more often and many people for environmental, ethical or health reasons choose this 100% vegetable style of food. But what are the real benefits of the vegan diet? And what should you eat to ensure that it is balanced and has no contraindications?

Vegan diet. It is talked about more and more often and many people for environmental, ethical or health reasons choose this 100% vegetable food style. But what are the real ones benefits of the vegan diet? And what should be eaten to ensure that it is balanced and not present contraindications?

First, it is important to emphasize that switching to a diet that excludes proteins of animal origin it is not in itself a healthy choice. It becomes so only when you eat in a different way, preferring fresh, seasonal, wholemeal foods and as little processed and packaged as possible.

If you follow a well-planned and varied vegan diet, including the right supplements such as vitamin B12 and, if needed, vitamin D (or more as needed), you can be sure to enjoy many. benefits, most of which also confirmed by scientific research.

BENEFITS OF THE VEGAN DIET

Excluding foods made with animal protein generally causes it to be increase the consumption of plant foods rich in vitamins, minerals and substances with antioxidant power, this is why it is believed that the vegan diet promotes longevity as well as, more generally, health.

Furthermore, by completely eliminating foods rich in saturated fat and cholesterol such as those of animal origin, it is possible to prevent some diseases such as cardiovascular ones, hypertension, type 2 diabetes and some cancers.

A good vegan diet can promote weight loss. According to a study presented on the occasion of Obesity Week a few years ago, vegetarians and vegans lose weight more easily than others and they are able to obtain better results, this is because they introduce less saturated fat and calories in their meals, still achieving the feeling of satiety.

Read also: WHY VEG IS BETTER? THE NUTRITIONAL ADVANTAGES OF A VEGETARIAN AND VEGAN DIET

Many people who follow a proper vegan diet also recover great energies and, the fact of eliminating milk and derivatives, paradoxically (compared to what is commonly believed) exposes them less to the risk of osteoporosis.

To recap the vegan diet can:

• Prevent some chronic diseases including cancer

• Be beneficial for type 2 diabetes sufferers

• Be useful in case of hypertension

Vegans, despite what the cliché still wants, don't just eat pasta and salads. I'm really there are many foods that can be included on a daily basis varying according to the seasons as regards fruit and vegetables but also changing types of cereals, legumes and oil seeds in order not to make one's diet monotonous.

Here foods that should be included in a balanced vegan diet:

The important thing is, as we have already said, to vary as much as possible by alternating grains such as rice, barley, quinoa, amaranth, buckwheat, etc., wholemeal or semi-wholemeal pasta and bread, fruit and vegetables according to the season, try all types of legumes (peas, beans, lentils, chickpeas, etc.) and oil seeds (pumpkin, sunflower, sesame, hemp, chia, etc.), integrate a product rich in omega 3 such as'linseed oil or iodine such as algae, etc.

there many vegan recipes appetizing to experiment, we present some of them:

EASY VEGANE RECIPES FOR ALL FLAVORS

Lunch: pasta and beans, pasta and chickpeas, rice and peas, but also pasta, rice or pseudocereals such as amaranth, quinoa, buckwheat, millet, etc. with vegetables, salads or other raw vegetables (preferably at the beginning of the meal) enriched with sprouts or seeds.

Naturally the quantity and combinations may vary based on the sex, age of the subject, specific health needs or other. For this it is always better contact a nutritionist expert in vegan diets.

THE MOST COMMON ERRORS

As we have already said, the vegan diet is not necessarily a healthy choice. So let's see what are the most common mistakes:

• Consuming too much refined bread and pasta

• Too often replace meat and cheese with equivalent based on soy

VEGAN DIET IN PREGNANCY AND FOR CHILDREN

But Is Vegan Diet Safe During Pregnancy? Can children also follow it? The answer is yes, as long as it is well balanced and, in the case of children but also of pregnancy, always better to rely on the advice of an expert nutritionist.

Read also: VEGETARIAN AND VEGAN DIET IN PREGNANCY AND BREASTFEEDING

Also on this topic theAmerican Dietetic Association (ADA), one of the most authoritative sources on nutrition, arguing that:

• "the lacto-ovo-vegetarian and vegan diets (without any ingredient of animal origin) meet the nutrient and energy needs of pregnant women;

It is now a commonplace that vegans eat few proteins and therefore may be deficient in these fundamental substances for our body, the only real contraindication for those who follow a 100% vegetable diet is a possible vitamin B12 deficiency if not correctly integrated through fortified foods or directly through a supplement. Other types of contraindications and side effects do not exist if you follow a well balanced and varied diet. Better avoid DIY for pregnant and breastfeeding women and small children.

THE OPINION OF THE NUTRITIONIST

We asked ad Alessandro Targhetta, doctor and expert on food intolerancesi, what do you think about the vegan diet. Here's what he told us:

“The choice to become vegan may seem like a fashionable choice today. In reality, the vegan choice has always been first of all an animal rights choice and only recently has it become a healthy choice, but also an environmental one, since they pollute the intensive cattle ranching of coal-fired power plants more! Choosing to drastically change diet and become vegan is a step that must be done with great attention, after having informed and well documented on this diet, on its undoubted advantages but also on the possible shortcomings that such a diet can entail if not well balanced. For which the "do it yourself" in these cases is not recommended. 'It is always good to rely on an expert and skilled nutritionist on the subject ”.

But what are they the strengths of the vegan diet?

“If we forget the important animal rights aspect of this choice, the most common and widespread reason for this decision is certainly the health one. Dr. Colin Campbell before and Prof. Valter Longo recently explained to us with scientific data in hand, that avoiding to consume animal proteins by favoring those of vegetable origin (legumes) has undoubted advantages on human health. Not only that, Prof. Valter Longo also suggests a diet low in vegetable proteins (0,8 g / kg body weight). In fact, after the period of low carb and low fat diets, it is now understood that it was instead necessary to drastically reduce the consumption of proteins and to use only vegetable ones. We know from many studies that there is a clear correlation between the consumption of animal proteins, especially those of beef or pork, and the onset of diseases, for example cardio vascular or some cancers, such as that of the colorectal or the pancreas. Not only that, animal proteins are acidic and promote many inflammations, see joint ones. Now you also know that animal proteins damage the endothelium of arterial vessels by promoting the production of LDL proteins (Bad cholesterol!) As an anti-inflammatory defense. Recent discoveries by Prof. Valter Longo have also told us that animal proteins induce the production of the growth hormone GH and consequently the cell growth factor IGF-1 with the serious risk of promoting the formation of tumors, as well as favoring a premature aging. And what about dairy products? As Dr. Colin Campbell explained to us, it is the casein in dairy products that creates serious problems for human health, not lactose. Also this protein would favor the increase of the growth factor IGF-1 with the risk of promoting many tumors. What about the eggs. Whether they are from intensive farms or from “happy hens” scratching around in the hen house, the proteins present in the egg white are often difficult to digest and the cholesterol in the yolk increases our cholesterol with a cardiovascular risk. In short, now there are a whole series of tests to prove that only plant-based proteins are good for humans, but always in modest quantities".

“So far I have talked about the benefits of the vegan diet. Now let's see the drawbacks. Surely the vegan diet is a low content of B vitamins (found in eggs, cheeses and meat). It is therefore always good integrate B vitamins with brewer's yeast flakes. There may also be an iron deficiency. It is therefore necessary to include those in a vegan diet foods rich in iron: Red lentils, azuki beans, dark chocolate, grains such as red rice or whole grains, red leafy salads. A calcium deficiency is more difficult, since whole grains, leafy vegetables (rocket), oily nuts are rich in it. Another deficiency was until recently those in essential amino acids, present in meat. Now with the advent of new gluten-free non-grains (amaranth, quinoa, buckwheat) rich in essential amino acids, this deficiency is no longer a problem. Instead, what I often see even in vegans, is an excess in the consumption of carbohydrates (pasta, bread, rice or corn cakes, etc.) which increases triglycerides in the blood and often creates hepatosteatosis (fatty liver). Furthermore, the excessive consumption of seitan, wheat muscle and carbohydrates such as spelled, kamut and wheat, has led many vegans to suffer from the new syndrome, Gluten sensitivity, with gastritis, colitis and many other related disorders. For this cI always advise those on a vegan diet to alternate cereals with and without gluten, and to reduce the consumption of seitan (pure gluten!). Finally, I will talk about soy. The vegan has found in soy an alternative to dairy products: milk, cream, bechamel, tofu, soy yogurt, etc. But many burgers also contain soy. This excess soy is dangerous. Rich in phytoestrogens, soy is not recommended in subjects with autoimmune diseases (thyroiditis with hypothyroidism for example), in many women who have undergone breast surgery for breast cancer (breast cancers are usually estrogen sensitive!). In men, consuming soy can lead to prostate problems over time. In addition, soy proteins are very allergenic. The risk is that over time you can become allergic to soy, with giant and systemic hives.

The vegan diet can it help to keep certain diseases at bay?

“This diet is indicated in many pathologies such as type II diabetes, arterial hypertension, autoimmune diseases (thyroiditis), obesity, osteoarthritis and in patients with cancer, but always under strict supervision of a nutritionist. There are no real contraindications to a diet, if not for the fact of being followed by a professional in order not to run into nutritional deficiencies ".

Vegetarian and vegan diet: how to make sure all the proteins you need ❯

add a comment of Vegan diet: proven benefits, examples, what to eat and CONTRAINDICATIONS