Caloric density: what it is and why it is important to know it if you want to lose weight without too many sacrifices 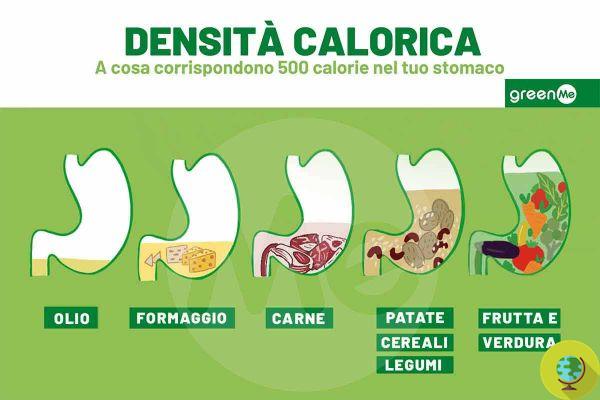 To lose weight without too many sacrifices, it is important to know the caloric density of different foods: let's find out everything there is to know

Have you ever heard of caloric density or energy density? This is the amount of calories in a food per unit of weight. Usually indicated as kcal per 100 g or per gram. What is the use of knowing it? To take in fewer calories and to promote weight loss without too much effort.

So by eating more low calorie foods, we can effortlessly reduce calorie intake. Which then is the principle of the so-called volumetric diet: in fact, it aims to ensure that the stomach, by ingesting large quantities of low-calorie foods with a large volume and satiating power, can first reach the sensation of fullness.

But be careful not to consider foods with a high calorie density necessarily as unhealthy, this depends on the type of food. Therefore they should not be totally excluded, but consumed less frequently and in reduced quantities.

Low and high calorie density foods: what they are

When can we talk about the low caloric density of a food?

Teeth: foods and drinks that damage and erode enamel ❯

add a comment of Caloric density: what it is and why it is important to know it if you want to lose weight without too many sacrifices