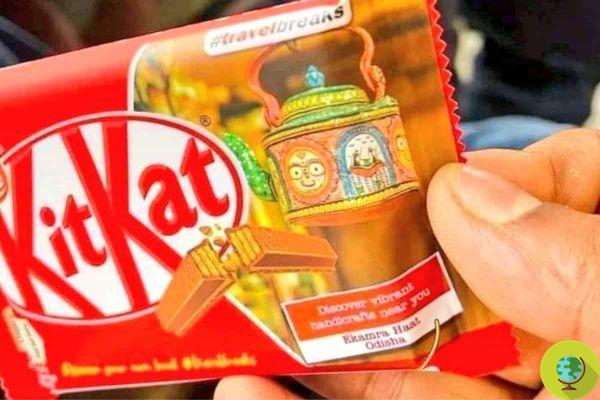 Controversy over using images of Hindu gods on the packaging of chocolate bars. And it's not the first time this has happened

Nestlé has withdrawn KitKat packages in India following a controversy that has alarmed social media and news sites. Ancient sacred cave paintings, found in the Konarak Sun Temple, were reproduced on the packaging of the famous chocolate bars, depicting the deities Jagannath, Balabhadra and Subhadra.


For the Indian community this was an act of offense, a real outrage: everything was perceived as an invitation to consume a greedy product, however, tearing the image of the sacred divinities from the package to take a bite of the famous biscuit.

Please remove the Lord Jagannath, Balabhadra and Mata Subhadra Photos In Your @kitkat Chocolate Cover . When People Are Finished The Chocolate They Are Through The Cover On Road, Drain, Dustbin, Etc . So Please Remove The Photos . @Nestle @NestleIndiaCare #Odisha#JayJagannath pic.twitter.com/9vFy0trazw

The company, through the twitter account We care at Nestlé, responded to the many messages of indignation by stating that the packages were designed to celebrate beautiful places but also the culture, art and skill of the craftsmen. Nestlé then reassured that it had started removing these packages from the shelves, apologizing for this disrespect that has unintentionally hurt the feelings of many people.

It is not the first slip of the American giant in India. In April 2021, he used the image of a red panda approached at the Keibul Lamjao National Park of Manipur in Meghalaya, which however does not host any specimens. The offending snack? A KitKat, even then.