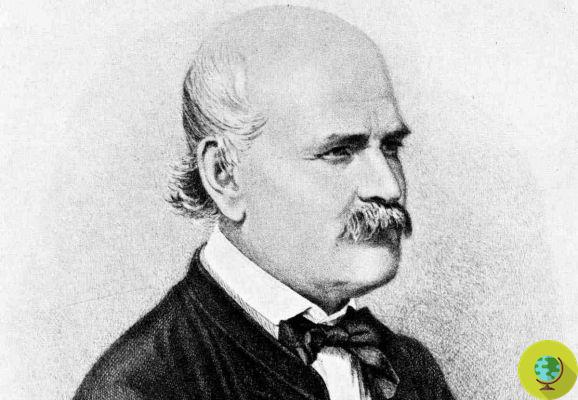 It was only 1847 when a Hungarian doctor discovered the importance of washing his hands well. He was Ignaz (or Ignác) Semmelweis and never expected that his advice would become invaluable in the 2000s.

Genius misunderstood because his intuitions at the time appeared banal and useless. He simply understood that from one patient to another something that could stick to his hands could cause an infection in turn.


In April 1847, while working in precarious form, Ignaz Semmelweis had discovered in Vienna that the puerperal fever, which killed up to 40% of women who gave birth in hospital, was an infection of the same nature as that which was life-threatening for surgeons who accidentally injured themselves during autopsies or during surgery on infected patients.

His intuition was that if the one who visited a woman in labor came from an operating room where they had performed an examination on a corpse without any protection (no washing or disinfection), or had first visited an infected person, could transmit a fatal disease to the mother.

The puerperal fever, in short, was caused by the doctor himself, carrying something that remained attached to his hands and which caused the disease.

Another finding was that obstetrics in Vienna had two pavilions: in the first there were doctors and students, in the second the midwives. In the second, the percentage of deaths from puerperal fever was lower, this is because midwives, unlike doctors and students, did not perform autopsies and therefore did not infect women in labor. It was then that Semmelweis proposed using one in the hospital chlorine solution to disinfect the hands, but the community of gynecologists did not agree and mocked the young doctor in every way.

However, with the support of other more far-sighted Viennese doctors, Semmelweis managed to reduce deaths by 90% in just one year. But the medical profession in general was so hostile to him that he was even turned away from the clinic.

His open letters to individual doctors and academies were of no use to him, and his every effort to convince doctors of the accuracy of his intuitions was of no avail.

Ignaz Semmelweis died in an asylum on August 13, 1865. A few years later, when Louis Pasteur laid the foundations and foundations of modern bacteriological technology, he was given all the credit.

Just two years ago, Google also celebrated with a Doodle the discoveries on the anniversary of the start of Semmelweis' internship as head of trainees at the largest maternity clinic in Vienna. Today it is thanks to his discoveries that we have an extra weapon to eradicate diseases as we did with typhus and cholera.

HERE we remind you how to wash your hands well.

The massacre of sugary drinks: they would cause 184 thousand deaths a year ❯