Restore sight to the blind thanks to photovoltaics 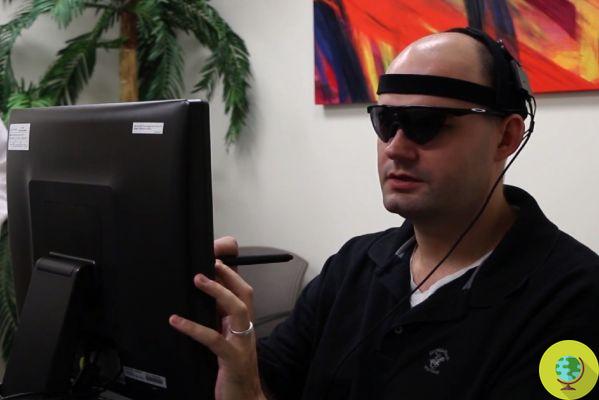 Very thin ocular prostheses, very similar to those used for solar panels, but so small in size that they can be inserted under the retina of the eye to restore sight to the blind.

Very thin ocular prostheses, very similar to those used for i solar panels, but so small in size that it can be inserted under the retina of the eye to restore sight to the blind.


It is the extraordinary project of the Stanford University School of Medicine, also published on Nature Photonics, who created a device capable of processing the flow of visual data through a pair of glasses, equipped with a micro camera and a mini computer. The images are displayed on a very small monitor integrated into the glasses (a system very similar to that of video game glasses) and sent with a very thin photovoltaic silicon chip implanted under the retina. From here, the electrical impulses send data to the brain and this allows the patient to regain sight.

"It works like solar panels on the roof: it converts light into electric current that flows in the retina - explained Daniel Palanker, one of the authors of the research - The different prototypes currently made require coils, cables or antennas to be placed inside the eye. with complex and invasive passages. But our retinal implant is thin and easily implanted. The surgeon just needs to create a small pocket under the retina to let the photovoltaic cells slide into it ”.

"Unlike previous subretinal and epiretinal implants that require an external power supply, - commented Angelika Lingnau of the Center for Mind / Brain Science (CIMeC) of the University of Trento - the silicon photodiodes receive power and data through pulsed near-infrared illumination, delivered through the video glasses. The retinal reaction - continued Lingnau - can be activated by the intensity of light near infrared and with at least two orders of magnitude below the ocular safety limits, which is important to avoid tissue heating “.

The studio has therefore set the stage for a new battle against blindness, which this time - unlike previous attempts - manages to exploit very small devices and thus avoid the clutter of large instruments and components, such as cables and coils, used in prostheses developed in recent years. But there is more: this new type of "bionic eye" aims to improve the lives of patients suffering from retinal degenerative diseases, such as age-related macular degeneration and retinitis pigmentosa.

Recalled by NaturaSì of organic Shiitake mushrooms due to the presence of sulphites: brand and lots ❯