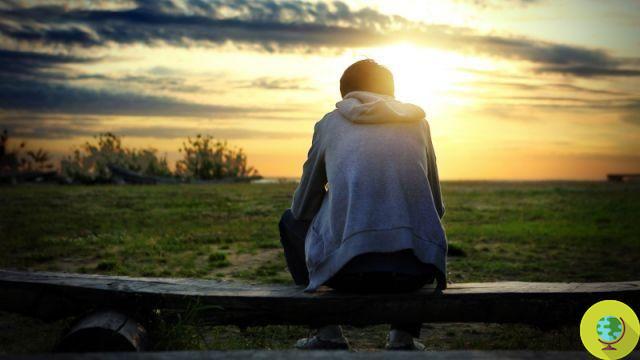 Loneliness and social isolation are even more dangerous than obesity and shorten life. The main association of American psychologists sounded the alarm following the results of some studies.

Loneliness and social isolation are even more dangerous than obesity and shorten life. The main association of American psychologists sounded the alarm following the results of some studies.


As we know loneliness is not always bad, learning to be alone allows us to get in touch with our deepest self and offers several advantages. This obviously does not mean experiencing unwelcome sensations due to an unwelcome loneliness or worse still not having relationships with others. What is really dangerous indeed is isolation "immediately" since man is a social animal in all respects.

To highlight the risks of this situation were two studies presented at the 125th annual meeting of‘American Psychological Association (APA). Being isolated from society has proved even more dangerous than obesity. In fact, all of us, as human beings, need contact with others, a need that allows us to survive.

The concern arises even more when you consider that this type of extreme loneliness is expanding and will continue to grow in the coming years as the life expectancy of the population increases and older people are more and more numerous. According to experts we could find ourselves struggling, and not only in the richest countries, with an epidemic of loneliness!

Emphasizing the risks of social isolation was Julianne Holt-Lunstad, a psychologist and lecturer at Brigham Young University in Provo (USA) who illustrated two reviews of previous studies linking loneliness and premature death.

The first review, which looked at nearly 150 studies with a total of 300 participants, found that the more one is integrated into society, the lower the risk of early death (it even drops by 50%). The second, which evaluated 70 studies involving a total of 3,4 million people, evaluated the impact of social isolation, loneliness or living alone on mortality and found that all these factors induce a greater risk of premature death than it can even become superior to that of an important and widespread problem such as obesity.

The challenge of the next few years could therefore be to promote social inclusion, especially of the elderly or of people who, once they stop working, risk losing important contacts with others, especially if they do not have a solid family behind them.

But why does loneliness affect health so much? Several previous research has shown that isolation can damage our immune system by making it weaker. This is even more true if we are talking about elderly people.

So let us always remember that not only correct nutrition and lifestyle but also good social relationships are key for our health.

Loneliness can hurt. And not just emotionally ... ❯