If it's too hot, ticks prefer humans to dogs. New harmful effect of changing climate 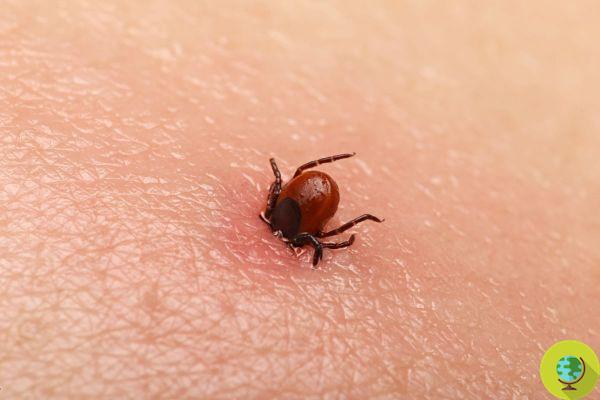 New research has shown, especially in tropical ticks, a new trend: that of preferring men to dogs if it is too hot

When temperatures rise, ticks seem to prefer humans to dogs. According to an American study that shows us a new harmful effect of climate change: in the future there could be a greater risk of contracting tick-borne diseases.

To say it is new research whose troubling results were presented at the annual meeting of the American Society of Tropical Medicine and Hygiene.

“Our work indicates that when the weather gets warmer, we should be much more vigilant for FEMR infections in humans. We found that when temperatures rose from about 74 to 100 degrees Fahrenheit [23 to 38 degrees Celsius], brown dog ticks carrying the disease were 2,5 times more likely to prefer humans to dogs, "said the dog. Laura Backus who led the study at the University of California Davis School of Veterinary Medicine.

FEMR is a disease caused by the Rickettsia rickettsii bacterium, which is carried by ticks. In Arizona, where several outbreaks of RMSF have been reported in recent years, and in other states in the southwestern United States, it is primarily transmitted by the dog tick (Rhipicephalus sanguineus), according to the Centers for Disease Control and Prevention (CDC) .

The disease recedes easily if treated with the right antibiotics within the first 5 days of infection, otherwise it can be fatal. The presence of FEMR in the United States has increased substantially in recent years from 495 cases in 2000, to a peak of 6.248 cases in 2017, again according to data from the CDC.

Predicting FEMR outbreaks is difficult, Dr. Backus said, but there is still something useful research can do:

"If we can identify the situations, the environmental factors, that lead humans to be bitten more often, we can hope to be able to identify and intervene more quickly and reduce cases."

Previous research work had suggested that temperature could be one of those factors to take into consideration and to confirm this hypothesis, the team of American researchers conducted an experiment on a sample of humans and dogs exposed indoors to 20 ticks at a time (of 2 types: tropical or temperate climates) at different temperatures (23,3 C and 37,8 C).

They could thus observe how ticks, which choose their hosts by smell, moved towards the dog, towards the human or remained stationary, depending on the conditions. There were barriers which prevented ticks from actually achieving their goals, then no one, neither human nor animal, was endangered.

What this research highlights has implications for how climate change could affect the incidence of FEMR.

In our country, spotted fever of the rocky mountains (FEMR) fortunately does not exist but the risk is not excluded that, if indeed this is the trend of ticks subjected to high temperatures, they could carry other diseases in the future.

If you have back pain or sciatica try to relieve the pain with a simple trick (and ... a tennis ball) ❯

add a comment of If it's too hot, ticks prefer humans to dogs. New harmful effect of changing climate