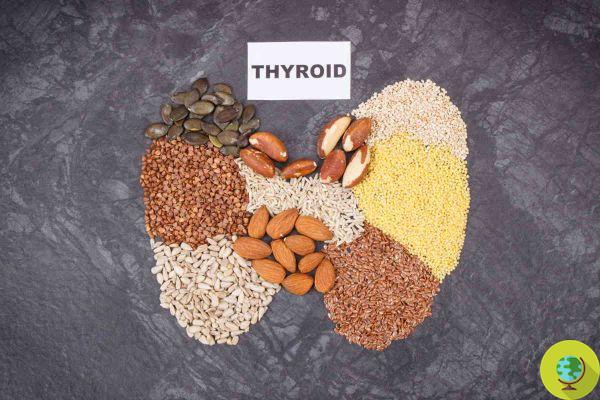 How to awaken the thyroid at the table? Natural remedies and foods to prefer or avoid for those suffering from hypothyroidism

Can those with hypothyroidism improve their condition at the table? Are there any foods to prefer or to avoid? There thyroid is a endocrine gland positioned at the level of the neck. It has the task of regulating the metabolism. Furthermore, it determines the blood flow directed to the various organs of our body. The cells, thanks to the blood, receive oxygen and nutrients.


Depending on the state of functioning of the thyroid, this can happen more or less quickly. When the thyroid is not functioning at its best, it is referred to as hyperthyroidism or, much more often, hypothyroidism.

What is the difference between hyperthyroidism and hypothyroidism?

Hyperthyroidism: What happens if the thyroid is working too much?

More common than hyperthyroidism is hypothyroidism. In this case we speak of a “tired” thyroid and of slowed metabolism. Due to the low presence of iodine, the thyroid volume increases and the goiter. Among the symptoms of hypothyroidism we find:

If the symptoms present are numerous, it is good to undergo a specific examination for the thyroid, in order to assess the situation.

How much is the daily iodine requirement?

As also specified by the ISS, the correct function of the thyroid gland is guaranteed by an adequate nutritional intake of iodine which on average in an adult is estimated at 150 mcg per day even if it varies according to sex and age, in particular:

Nutritional iodine deficiency is one of the most serious public health problems according to WHO estimates and can affect all stages of life, although the effects can be more severe in pregnancy and early childhood.

The problem of iodine deficiency is given by the presence of this element in food and water is very variable and often too low compared to human needs. Iodine is mainly contained in sea fish, crustaceans, molluscs and dairy products. On the other hand, the iodine content is very low in vegetables and fruit. To make up for this deficiency, the daily use of iodized salt is recommended.

Thyroid: how to avoid iodine deficiency with the right foods

If hypothyroidism is the problem, it may be necessary awaken the thyroid. How to put it back in motion? There are some alimony e natural remedies useful to ensure the daily need for iodine and to promote a good functioning of the thyroid gland, preventing future discomfort. Once again, an important role is played by nutrition. The thyroid is a very delicate gland. For each type of treatment, it is necessary to consult an endocrinologist expert.

It is a'seaweed used to stimulate the production of thyroid hormones within phytotherapeutic treatments. Its presence is frequent on the Atlantic and Pacific coasts. It is given in drops, in the form of mother tincture. The doses may depend on the specific case.

This remedy comes from India and the Ayurvedic medicine. It is also known as guggul. It is used in conjunction with Fucus-based herbal treatments. It has an anti-inflammatory effect on the joints and blood vessels. It stimulates fat metabolism and reduces cholesterol. It is recommended to take it under medical supervision as it could interfere with thyroid hormones

The diet to follow in case of thyroid problems, with particular reference to hypothyroidism, can vary from person to person. Generally speaking, people with hypothyroidism should avoid:

Foods to eat in moderation as they contain goitrogens or are known irritants when consumed in large quantities:

Foods to prefer with hypothyroidism

People with hypothyroidism should aim for a diet consisting of vegetables, fruits, and lean meats. They are low in calories and very filling, which can help prevent weight gain. In general, vegetable foods rich in iodine should be preferred, but also in selenium which rebalance the thyroid.

Foods that speed up metabolism:

Powerful isolates "super" antibodies may be the most effective against coronavirus. I study ❯

add a comment of Hypothyroidism: the best foods and tips to awaken the thyroid (with foods to avoid)