Do you want to prevent depression? Run for 15 minutes a day! 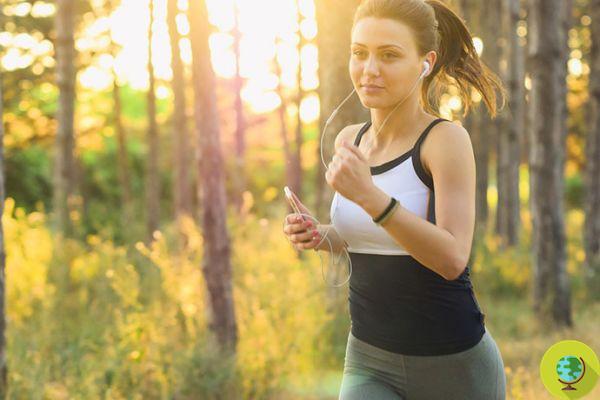 solo 15 minutes of jogging per day they might reduce the risk of depression. Says a new study conducted in the United States.

New evidence suggests that even a small amount of exercise, such as 15 minutes of running a day, would be able to reduce the risk of depression.

To state this, a recent study from Massachusetts General Hospital in Boston sampled and examined more than 600.000 adults, assessing their genetic makeup, medical history and physical activity levels. The researchers determined that participants who were genetically more likely to exercise were less likely to develop depression.

But, as stated by Dr. Karmel Choi, author of the research

"The results provide" clear evidence "that being physically active, regardless of one's genetic makeup, can help protect against depression"

It is certainly not the first time that practicing a moderate amount of physical activity has been associated with a lower risk of falling prey to depression. Previous studies have also shown interesting associations between people who exercise and lower risk of depression. And this was true regardless of who the person concerned was.

The key to our mental health would therefore be to be active every day, making sure that in those 15 minutes, the heart rate is increased by about 50%. At least this is the opinion of Dr. David Agus who reminds us that we don't necessarily have to do hard exercises, sweat excessively or run out of breath.

The doctor also hopes this latest research will have an impact on how doctors treat depression. And for him it is already like this:

“When my patients come in and say, 'I'm starting to feel a little depressed and I don't do much', my first thing I prescribe to them is not a pill but to go out and do something,” Agus said.

So let's remember to move more and, if we don't like running, walking briskly or even spending time in the vegetable garden or garden is fine. However, according to the researchers, these activities must be conducted for at least 1 hour every day.

Do you want to lower your blood pressure? This is the best vegetable against hypertension ❯

add a comment of Do you want to prevent depression? Run for 15 minutes a day!