Do you sleep badly? Your gut could (also) be to blame

Rest is essential but we don't always sleep well. How come? The health of our intestines could play an important role in the quality of sleep.

Rest is essential but we don't always sleep well. How come? An important role on the qualità del sonno could have the health of our intestines.


According to new research, conducted by a team from Nova Southeastern University (USA) coordinated by Robert Smith, the intestinal microbiota (i.e. the composition of our bacterial flora) also affects sleep in some way. In fact, according to the study published in Plos One, this would have the ability to qualitatively and quantitatively modify the night's rest.

In order to claim this, the researchers took it as a sample 40 healthy men of which they analyzed the sleep-wake cycles in relation to the intestinal microbiota of each. It was thus seen that some bacteria, such as Bacteroidetes and Firmicutes, Were associated with better sleep while others, including Lachnospiraceae and Corynebacterium, have reduced and contrasted sleep.

It was then seen that those with an abundance of Coprococcus in their intestines tended to wake up often, while those with Erysipelotricheaceae and Holdemania did less.

The suspicion that the composition of bacteria in our gut could play a role in good sleep has long been suspected but it is the first time that research has actually found a link. It is not clear, however, if the same thing happens in women (the researchers bet yes) and if, by repeating the experiment on a larger scale, the result would remain the same.

Among other things, the researchers have not identified the exact cause of the link between the composition of the microbiota and the quality and quantity of sleep. It is therefore evident that further investigations are needed on the issue.

However, the study also examined another interesting aspect by testing the correlations between interleukin IL-6 (an important factor in sleep regulation) and the intestinal microbiota. The link is important as intestinal bacteria interact with various molecules produced by the immune system, including IL-6.

It was thus found that having a rich and diverse microbiota is positively correlated with interleukin and with the quality and quantity of sleep. Seven different bacteria would be in particular those positively linked to this substance, among which are Sutterella, Desulfovibrio, Bilophila and Pseudoalteromonas.

The key to the relationship between intestine and sleep could therefore be precisely in the exchange between bacteria and molecules that regulate our rest. 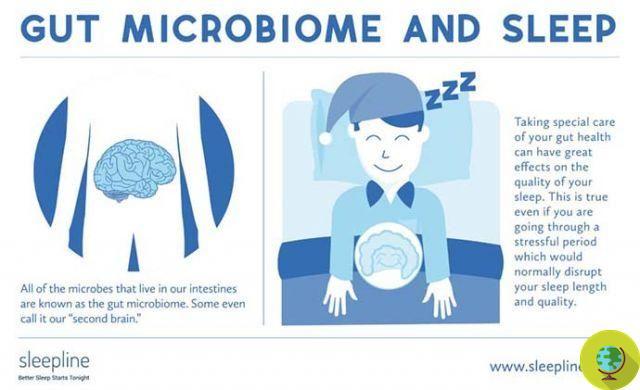 The findings of the research are therefore important and could pave the way in the future a new treatments for sleep problems that intervene right on our intestine, manipulating the microbial composition with special supplements.

According to experts, poor sleep negatively affects the diversity of bacteria within our intestines and vice versa. It is therefore a sort of snake that bites its own tail, so all that remains is to try to get out of this vicious circle in some way.

Sleeping with the light on has this side effect on the body, even when it is small and weak ❯

add a comment of Do you sleep badly? Your gut could (also) be to blame