Vegans, vegetarians or omnivores: how does the microbiome change according to the diet?

The intestinal bacterial flora, in fact, does not change when the dietary style changes if it is rich in fats.

Vegetarian, vegan or omnivorous diet, what changes for the microbiota? Nothing if the diet is still high in fat. The intestinal bacterial flora, in fact, does not change when the dietary style changes, if fats are very present. In this way, none of the three types of diet would be the most "healthy".


This is what emerges from a study by the Experimental Zooprophylactic Institute of the Venezie (IZSVe), which evaluated the composition of the vegan, vegetarian and omnivorous diet.

The aim of the research, published in Frontiers in Microbiology, was to evaluate the impact on the intestinal microbiota resulting from the consumption of food of animal origin.

The microbiota is the set of microorganisms that inhabit a part of the human organism. The intestinal ones perform many useful functions: they demolish the polysaccharides of dietary fiber that our enzymes are unable to break down and protect the intestine by counteracting the action of pathogenic bacteria and the entry of toxins.

101 normal weight volunteers who followed an omnivorous, vegetarian or vegan diet were involved in the IZSVe study. Each had to provide their own food diary and fecal sample for studying the composition of the microbiota.

READ ALSO: The Western diet is extinguishing the good bacteria from our gut

The researchers looked for differences between the microbiota of omnivores and that of vegetarians and vegans without obtaining statistically significant results. The three groups were in fact perfectly overlapping and among vegans and vegetarians there was not even a prevalence of microbial populations typical of a diet rich in fiber.

“The scenario observed was surprising, as we expected to see stark differences between people eating so differently. On the other hand, it became clear that the “label” of vegan, vegetarian or omnivore is not sufficient to account for the impact of the diet on health ”, declared Antonia Ricci, health director of the IZSVe and scientific director of the research.

The reason why? All participants, regardless of the foods consumed (of animal or vegetable origin), followed one diet rich in fat and low in carbohydrates and proteins. A type of diet that, according to the researchers, makes vegans and vegetarians practically resemble omnivores, with the consequence that none of the three diets, for the moment, would win the "health challenge". 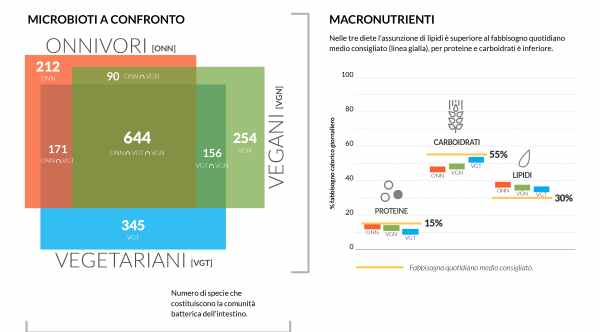 The problem, then, seems to be in the abundance of fats which, if in most cases they are saturated fatty acids present in high quantities in all foods of animal origin, even for vegetarians and vegans there could be a surplus of saturated fats present. in some plant foods.

The solution? Always the same: whatever eating style you choose, never lose sight of a varied diet, as well as a healthy lifestyle and regular physical activity, which will also be good for the intestine.

add a comment of Vegans, vegetarians or omnivores: how does the microbiome change according to the diet?