Stevia has zero calories, but is it really a good alternative to sugar? The opinion of the nutritionist 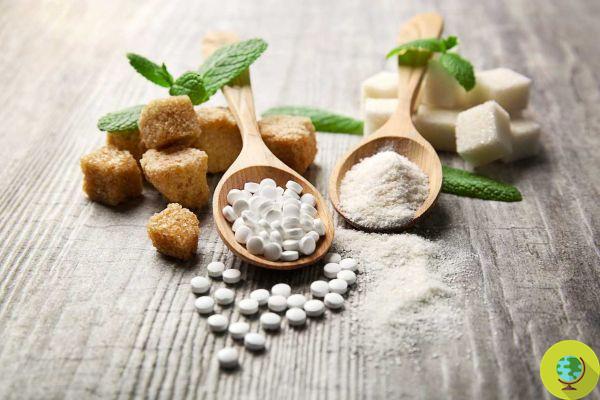 Stevia is often presented as a good natural alternative to sugar. But is it really so? We asked the nutritionist

For some years now, stevia has spread and is considered among the best natural alternatives to sugar. But is this sweetener really healthy? We asked for help from "our" nutritionist who revealed the main characteristics of stevia and explained why it should not be abused.


Stevia is a perennial shrub of the Asteracae family, native to the northeastern part of Paraguay and Brazil. The plant is characterized by having long green leaves that have been used by local populations since ancient times as a sweetener. In fact, they have a very strong sugary flavor that slightly resembles that of licorice.

But what are the characteristics of stevia? And what we find in the supermarket is always pure or is it mixed with other ingredients?

We asked the nutritionist Flavio Pettirossi  what are the main characteristics of stevia and if it is really a recommended option over sugar.

Here's what he told us:

"Stevia is a source of non-caloric sweetening compounds, such as steviol glycosides: among them the best known are stevioside and rebaudioside A, which make up about 90% of all glycosides present in stevia leaves and which are able to withstand high temperatures (up to 200 ° C), consequently lending itself to use also for baked desserts (stevia has an aftertaste of licorice which in desserts, after cooking, disappears thus making the sweetened preparation as if there was sugar present). The sweetening power of stevia is 200 times that of sugar (and therefore the necessary doses are much smaller). It it does not contain any calories and this makes it useful for patients suffering from obesity and diabetes as it does not increase blood sugar levels ”.

But what we find at the supermarket is always pure stevia?

“Let's be careful, we don't always find pure stevia extracts, but a mix of
steviol glycosides with other sweeteners (sucrose, glucose-fructose syrup, erythritol, fructose) and synthetic sweeteners have a very high sweetening power. Precisely for this reason, as always, reading the label comes in handy ”.

Is stevia really a good alternative to sugar?

“Very often those who follow low-calorie diets tend to replace white sugar with other substances such as stevia which is calorie-free, yet paradoxically, it seems that artificial sweeteners and even stevia make you fat. In fact, numerous studies state that, like artificial sweeteners, stevia can lead to metabolic alterations that result in weight gain. This because? The perception of sweet taste is linked, even on a neurological level, to the expectation of food capable of supplying energy. If the correlation between expectation (the body expects something energetic) and reality (sweeteners have no calories) is distorted, the body has a harder time regulating itself in food intake. The body will therefore tend to search for more food and to acquire more of it in the following hours than it really needs. To prepare for the hormonal response to ingested food, if you eat something 200 times sweeter than sugar such as stevia, the cell receptors (which are present throughout the digestive system) will open wide to store the sugar they expect to arrive. . So, if you only ingest a coffee with stevia, your blood sugar cannot rise, but if we add a slice of cake or a croissant or simple biscuits we will have a higher blood sugar increase than if we had used sugar ".

“Because the physiological mechanisms will be altered and the body will not synthesize substances capable of slowing down gastric emptying and promoting the sense of satiety and consequently we will be led to eat more. Then except in cases of necessity related to diseases such as diabetes we try not to abuse with the use of stevia. My advice for good weight control is to learn to eat healthy every day, then to reduce sugar from everyday life, little by little, so as to get used to less and less sweet flavors. At that point, it will certainly not be a mistake to ruin our figure or health ”.

add a comment of Stevia has zero calories, but is it really a good alternative to sugar? The opinion of the nutritionist