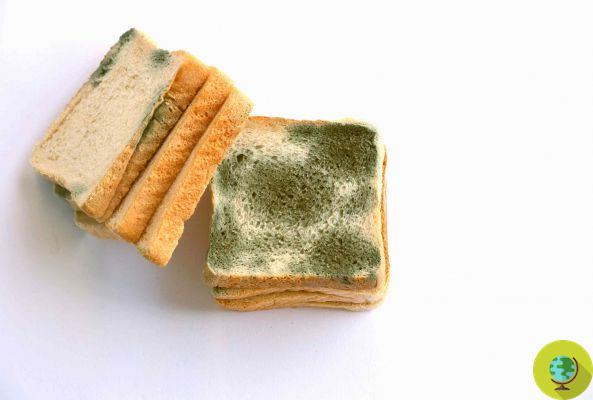 Finding mold on a food you are about to eat is always a nasty surprise. But is it in any case a danger or is it possible to remove the superficial part of that food and consume it anyway? To clarify this aspect, the magazine Il Salvagente has analyzed what happens to some foods struggling with the onset of mold.


Sometimes the foods we buy stay too long in the fridge or pantry and so we can find ourselves struggling with mold. This can for example be visible on aged cheeses, sandwich bread but also salami or jam.

Il Salvagente sampled and had 4 foods analyzed in the laboratories of the Maurizi Group, specialized in food safety. The goal was to understand which types of molds develop more frequently in these products and in what concentration but also how they behave in contact with food, i.e. their power to penetrate and spread even within the food.

Molds, if they produce mycotoxins, can pose a risk to our health, so the doubt will have arisen a little to all of us: if they appear on certain foods, these they can still be consumed (eliminating the compromised part) or would it be good to throw them away?

The answer, as the study showed, is it depends.

But let's first see how the test was conducted. All products, including Emmental cheese and light blueberry jam, they remained longer than they should in the refrigerator (if they required this type of preservation) or at room temperature until the first visible molds appeared. At this point the samples were opened in order to accelerate the degradation processes and the development of molds, then observed under an optical microscope.

The speed of penetration of molds in relation to different foods was also studied, analyzing the parts where these were not visible.

The microbiological analyzes showed, as expected, the presence of mold on all the samples, therefore regardless of the type of product. However, there were also substantial differences between food and food, not only in the amount of mold that managed to penetrate inside but also in the types of microorganisms present.

In the case of the light jam, the mold found by the analysis is Rizophus spp, a fungal pathogenic microorganism, while Peniciullium spp was present in the aged cheese.

As regards the ability to penetrate molds, Il Salvagente reminds us that this also depends on some characteristics of the food itself, for example the degree of humidity or the pH.

Therefore, great differences between foods were highlighted and it was concluded that some must be thrown away when the first molds appear, while others, by eliminating the damaged part, can still be consumed.

Foods that can be eaten while eliminating mold

The test showed two foods that can be eaten even if they have started to show mold.

It is about the aged cheeses, like the one taken as a sample, where you can simply eliminate the moldy area and consume the rest, better if cooked. In fact, the analyzes showed that the concentration of molds in the central areas was not relevant. The case of fresh cheeses is different, on the contrary, precisely because they are much more humid, they suffer from the problem of mold that expands quickly and therefore they must be thrown away.

Then there is the jam, the amount of spores of which in the areas where mold was not visible has been defined as "worrying" but there is a distinction to be made between jam with sugar and dietary variants. Sugar, in fact, inhibits the formation of toxins, so in this case we can eliminate the compromised part and eat the rest. However, if it is a light jam, where therefore there is little or no sugar at all, it is good to throw it away.

To find out which foods resulted to be thrown away according to the test, refer to the April issue of Il Salvagente.

If you want to deepen the topic and know which foods can be eaten and which are not in case of mold, read: