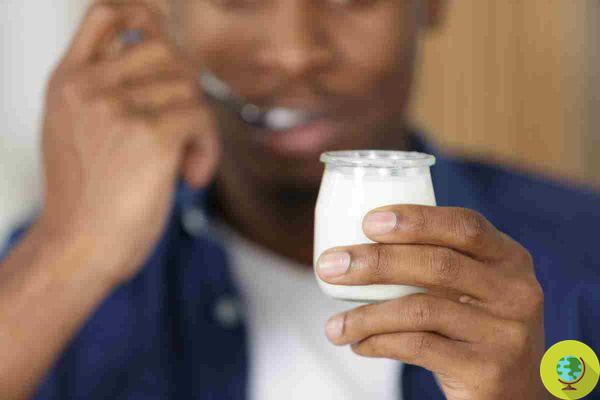 According to a new study, eating yogurt two or more times a week could help prevent pre-cancerous gut growths.

Yogurt can help reduce the risk of pre-cancerous growths in the gut of men. According to research, eating just two servings of yogurt in a week already helps reduce the risk of developing adenomas that precede the development of bowel cancer.


To find out is a new observational study, according to which this wonderful food, already known because it is capable of reducing the risk of cardiovascular diseases and regulate bacterial flora, would also be able to interact with the composition of populations of microorganisms found in the intestinal system, protecting its health.

Previously published research had already suggested that eating yogurt regularly could reduce the risk of bowel cancer by changing the type and volume of bacteria in the gut (microbiome), but it was still unclear whether the same type of intake could also be associated with a lower risk. of precancerous growth, known as an adenoma.

For this the researchers analyzed supply ed possible development of adenomas more than 32.606 men included in the Health Professionals Follow Up Study (the study that evaluates the relationship between nutrition and male health), and more than 55 women involved in the Nurses Health Study (which since 1976 has examined those who are the risk factors of the main chronic diseases in a large population of women). All participants, men and women, underwent intestinal endoscopy between 1986 and 2012 and every four years provided information on their lifestyle and diet, including the amount of yogurt they consumed in the pre-year period. 'interview.

During the study period, 5811 adenomas developed in men and 8116 in women. Compared to men who haven't eaten yogurt, those who ate two or more servings a week were 19% less likely to develop a conventional adenoma. This lower risk was even greater (26%) for adenomas that were highly susceptible to becoming cancerous and for those located in the colon rather than the rectum.

While no obvious association was observed for men with a potentially more dangerous (serrated) type of adenoma, a trend was observed for a decreased risk of large, i.e., larger than 1cm adenomas.

Among women, however, no associations emerged between the intake of yogurt and the development of adenomas.

This is an observational study, the researchers point out, and as such it cannot establish the cause. Further research would be needed to confirm the findings, but one thing seems clear at the moment: Lactobacillus bulgaricus and Streptococcus thermophilus are the two. bacteria commonly found in live yogurt that can reduce the number of cancer-causing chemicals in the gut.

This would explain the link between yogurt consumption and lowering the risk of adenomas in the colon. In fact, this digestive tract has a more acidic pH, a more hospitable environment for these good bacteria. Alternatively, the anti-inflammatory properties of yogurt could protect against the precancerous risk. How to make one at home? Here are some tips on how to make a delicious, light diet yogurt!

Dulce Agonia: Coca Cola and the background of the diabetes epidemic in Mexico (VIDEO) ❯