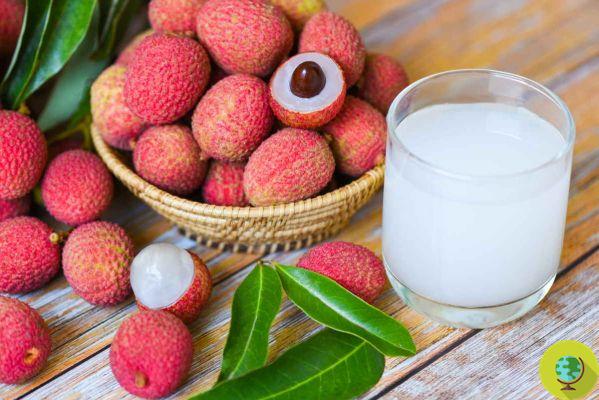 Lychees are exotic Asian fruits that can be dangerous and have negative consequences for blood sugar when eaten unripe or on an empty stomach. Let's see why.

Have you ever heard of litchi? An exotic fruit typical of China and Southeast Asia, lychees are characterized by a white, delicate and fragrant pulp and a pink or red skin that is not edible but easily removable. However, lychees can have dangerous effects especially on children, as they contain a type of fundamental amino acids which can severely affect levels of glycemia in the blood. Let's see why in more detail.


Why can lychees be dangerous?

La Traditional Chinese Medicine he already knew of the risks you could incur by eating this fruit and it was customary to eat lychees only on a full stomach. Eating them on an empty stomach, in fact, resulted in serious health problems due to the presence of toxins, such as methyleneiclopropylglycine (MCPG) and the hypoglycine A, which can drastically lower the blood sugar level, creating a danger of death in children encephalopathy, in particular if they are malnourished and the fruit is not well ripe. The more unripe the fruits, the more dangerous they are. (Read also: Hypoglycemic encelopathy caused by lychees: what it is and why it kills children in Asian countries)

As reported by the scientific journal The Lancet, many children in India have died from ingesting lychees as they did not get enough food and ate a lot of lychees in the harvest season. Suffice it to say that in June 2019 alone, 150 young victims were reported in the northern region of Bihar.

The main negative effect of consuming large quantities of unripe lychee fruit is a severe one hypoglycemia, aggravated by fasting, which damages the brain. This disease is known as hypoglycemic encephalopathy characterized convulsions and coma and leads to death in 40% of cases.

Should we stop eating this fruit?

If you have blood sugar problems, it would be better to consume this fruit sparingly also because it is absolutely not suitable for replacing a meal, for losing weight or for those who are vegan or fruitarian. If you have any sudden health problems after consuming these fruits, go to the hospital immediately for a quick blood sugar fix.

The simplest way to consume them is therefore to enjoy them at the end of a meal when you are already full.