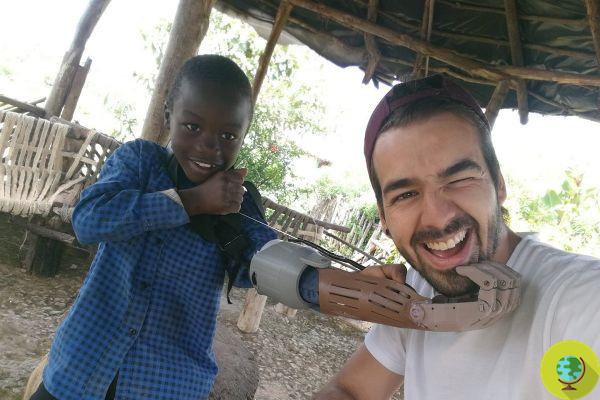 The young Spanish engineer who makes 3D printed arms for destitute people around the world, helping them to improve their lives.

Not everyone in the world can afford a prosthesis, thousands of euros come, yet countless people are in dire need of it.


And this is why the engineer Guillermo Martínez had the brilliant idea of ​​producing 3D prosthesis, definitely cheaper than traditional ones.

An ideal alternative for all those living in conditions of economic hardship.

It all started when Guillermo landed at Nairobi airport in 2017 and the idea of ​​3D printed prosthetics was just a hobby.

Today, years later, that pastime has become a project that takes the name of AYÚDAME3D and the old prototypes printed at home have turned into a technological revolution and a model of global solidarity.

Because after the success in Kenya, where 3D prosthetics have been selling like hot cakes, AYÚDAME3D has expanded into 40 other countries, and delivers at least 150 arms a year.

Estela already has her tresdesis! Soon we will be able to see the video of this beautiful delivery (:Do you want to collaborate? Find out how by going to Ayudame3D.org

Finalizing six new prostheses that will be sent these days to people from Spain, Mexico, Chad, Tanzania,...

Guillermo learned how to make prosthetics through the internet, then improved the prototypes to allow the hand to grasp objects.

The project continues to work also thanks to the support of monthly donations from partners, to social responsibility projects in companies and to awareness-raising activities, as well as to the many volunteers committed to carrying it out.

Website launches! From www.Ayudame3D.org can you access all the information about the project and participate in it?

Volunteers who do not know each other personally, at least not all of them, but who are still strongly motivated because they share the goal that prompted Guillermo to commit himself in this direction, to improve many human lives. One example is Eduardo Martin, a packaging designer who, together with his daughter Nuria, has transformed his hobby into a powerful contribution for those suffering from some kind of amputation. A form of cyber solidarity to be imitated!

Guillermo, for his part, is proud to have been able to offer hope to so many people because his prostheses do not simply help to grasp things, but allow them to return to the world of work, increase schooling and avoid inequalities. Truly a beautiful project that we hope will continue to grow and to which we too can make a contribution by making one donation sul sito di HELP ME3D.

add a comment of This young engineer makes 3D printed prosthetics, changing the lives of the world's poorest