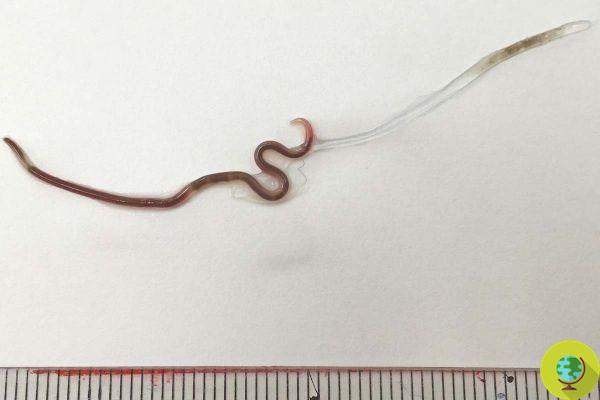 In Japan, a woman who had eaten sashimi a few days earlier had a worm of almost 4 centimeters extracted from a tonsil.

Doctors at St Luke's International Hospital in Japan removed a parasite (which was nearly four centimeters long) from the tonsil of a 25-year-old woman who complained of pain and irritation in her throat after eating sashimi a few days earlier. .


Everything ended well and the woman, from Tokyo, completely recovered after the parasite that had visibly grown in one of her tonsils was extracted. The hospital doctors removed it with simple tweezers.

The case was described in the American Journal of Tropical Medicine and Hygiene where doctors point out that the parasite was still alive at the time of removal from the patient's left tonsil and that her "symptoms improved rapidly" after the procedure.

The worm was quickly identified as one of several types of parasites that can infect people who eat raw meat or fish. The woman reported having eaten a plate of assorted sashimi 5 days before the parasite was removed.

The parasite in question (Pseudoterranova azarasi) it's a rare nematode of the Anisakidae family. It usually stops in the stomach but in this case it was a fourth stage larva that continued to grow (at the time of removal the worm was 3.8 cm long) around a tonsil.

Doctors clarify that these cases have become more common around the world due to the ever-growing success of sushi and sashimi. However, the same type of infection can be caused by raw or undercooked meat.

To avoid unpleasant situations like this, wouldn't it be enough for all restaurants to use the blast chiller with due care?

What could happen to your body if you always eat sushi

Anisakis, the sushi parasite is more and more widespread. How to avoid poisoning

They eat squash and zucchini and go completely bald ❯