Salt: the 6 unsuspected foods to avoid with high blood pressure 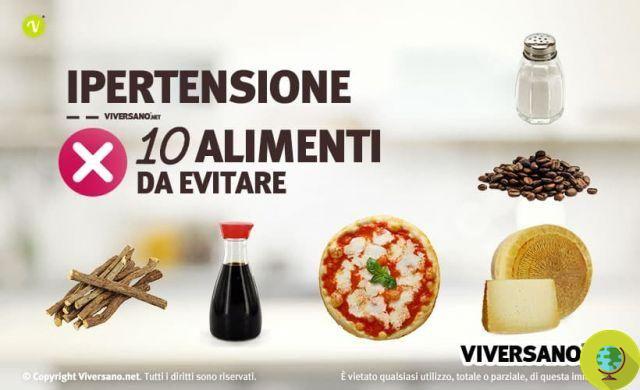 Excess salt: here are the 6 foods to pay more attention to.

As sale do we consume every day during meals? It is almost impossible to calculate it, as part of the salt present in our diet is already naturally contained in the foods we consume. The main problem to stem the consumption of excess salt, however, concerns its own hidden presence negli packaged foods.


According to the guidelines of theCREA, the consumption of salt in addition to food should be limited. Most of the salt we consume when we are at the table happens without our knowledge, since its content in many commonly used packaged foods is much higher than we can imagine.

This is an aspect on which American doctors wanted to investigate in more detail, in particular with regard to the question of the quantity of salt contained in industrial and packaged food, making a list of 6 foods most indicted because of the occult presence of salt. Here are which foods according to experts we should pay more attention to:

1) Bread and baked goods: a slice of non-homemade bread could already contain 15% of the salt intake which should not be exceeded daily. Attention should also be paid to packaged crackers and breadsticks and other savory snacks.

2) Sliced e turkey or roast-beaf meat sold in slices and ready to eat represent the second group of foods at greatest risk due to the excessive salt content, which is used to enhance the flavor and to improve the conservation of meat.

3) Pizza: also in this case we refer to non-homemade products, packaged pizza, frozen or in any case of industrial production. Two large slices of pizza could already contain the total amount of salt to be taken in a single day.

4) Roast chicken: we refer to roast chicken packaged purchasable in supermarkets. So pay attention to the quantity of salt indicated on the packaging. The experts took care of averaging between various brands.

5) Canned ready soups: it would be healthy foods only in appearance, as their salt content was judged to be high and to be monitored by experts. Better to replace them with fresh vegetable soups to prepare at home.

6) The stuffed sandwiches they represent the last category of food that experts wish to warn consumers about. Especially under accusation are excessive seasonings and the addition of packaged sauces with a high salt content such as ketchup and mayonnaise, perhaps combined with the aforementioned cold cuts.

To limit the consumption of common kitchen salt, it is good replace these foods with their own home version, in which del whole sea salt, which combines the presence of sodium chloride with the presence of important minerals such as iron, calcium, potassium and magnesium, which are able to counterbalance it.

Another piece of advice to decrease the consumption of salt, especially useful for those suffering from hypertension, is to gradually get used to consume less salty dishes and replace the salt with different toppings, which can be represented by spices, and by herbs.

A flavorful condiment made from whole sea salt is the gomasio, consisting of coarse salt and toasted sesame seeds, which can be easily prepared at home or purchased in organic food stores. Whole sea salt is commonly found for sale in supermarkets and grocery stores. In case you suffer from hypertension, you may need to follow a specific diet. It is therefore advisable to contact your doctor for more information on the subject.

Hypertension: This is why salt increases blood pressure

Gomasio: from Japanese cuisine an excellent alternative to salt

add a comment of Salt: the 6 unsuspected foods to avoid with high blood pressure