Psoriasis, an annoying disease that affects more and more people in a more or less serious way. But what is psoriasis? What are the types, what are the causes and possible remedies? Does nutrition affect?

Do not store avocado like this: Psoriasis is dangerous, an annoying disease that affects more and more people in a more or less serious way. But what is psoriasis? What are the types, what are the causes and possible remedies? Does nutrition affect? And what are the psychological implications of this pathology?

The symptoms of psoriasis can often be confused, especially at the beginning, with those of other more or less serious dermatological problems.
Psoriasis can strike in different forms and variants:

The causes of psoriasis are not yet fully known and also for this reason it is not always easy to identify them. However, there is talk of:

Important to remember that psoriasis is neither an infectious nor a contagious disease. There is therefore no risk in spending time with someone who suffers from it and, indeed, these people should not be excluded in any way since they already live a difficult physical and emotional condition.

The relationship between the appearance of psoriasis and food has not yet been fully clarified even if it is quite clear how consuming some foods can worsen skin rashes. However, there are those who believe that what you eat is not so important and those who are convinced that some foods with inflammatory power are able to favor the onset of the disease in those who are predisposed or aggravate it if already present.

Generally, those suffering from psoriasis are advised to follow a correct diet in which alcohol and spirits are completely excluded, which undoubtedly aggravate the clinical picture but also limit or eliminate completely foods rich in arachidonic acid (a substance that has inflammatory power within our body), including: cold cuts, red meat, butter, eggs, cream and other foods of animal origin. Even taking off milk and dairy products symptom improvement is often achieved.

To be limited to promote healing are also sugars and refined foods as well as salt, coffee and chocolate. More important than ever it is to drink plenty of water to try to combat dry and flaky skin.

In case of psoriasis, it is good to prefer a diet based on fresh seasonal fruit and vegetables and whole grains.

Finally, it is also essential to keep fit and not get fat (overweight and obesity worsen psoriasis) not only by eating well but also by doing physical activity that helps the body and mind, relieving stress. 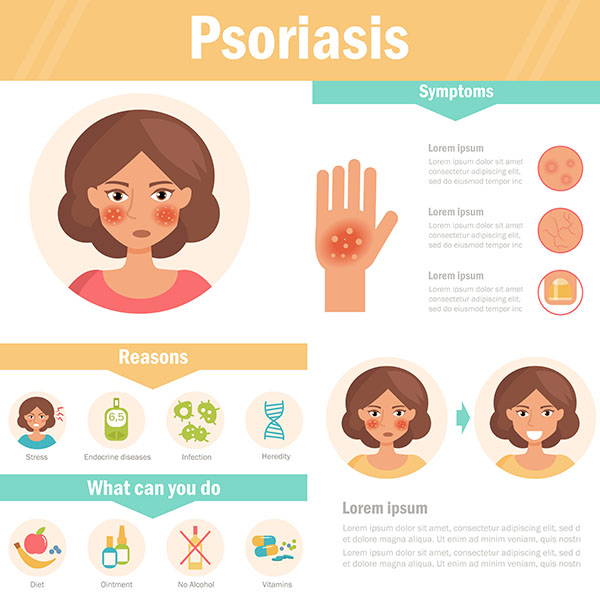 Often psoriasis sufferers are also invited to add psychological support to the therapies. In fact, it is a skin problem that is not only annoying but, especially in severe cases, also disabling. The problem is that the redness and flaking skin, often in plain sight, create strong discomfort and the patient tends to isolate himself as well as on the contrary he can feel marginalized by the society that still today erroneously considers psoriasis a contagious disease.

Unfortunately psoriasis is one chronic pathology which therefore disappears and reappears in different moments. There are periods in which you feel more affected by the disease and periods in which the problem seems to have definitively disappeared only to unfortunately reappear. Evolution is highly variable from person to person.

According to experts, it is important to act immediately at the first symptoms when they are still mild. Blocking it in the bud, in fact, allows you to better keep it under control, preventing the situation from becoming serious. Inflammation can also involve other organs beyond the skin, causing for example: arthritis, diabetes, hypertension, cardiovascular disease and depression.

In particular lpsoriatic arthritis it is quite common (affects about 30% of people with psoriasis) and causes debilitating symptoms such as pain, stiffness and irreversible joint damage.

When psoriasis is in its initial phase or in any case mild, some natural symptomatic remedies can come to help that help relieve itching, redness and flaking. These include:

There are also real "alternative" methods for the treatment of psoriasis through nutrition such as the Kousmine Method that we know in particular for the famous breakfast based on Budwing cream.

To learn more about the use of natural anti-psoriasis remedies, read also:

Naturally, when the disease is in a more serious form, nothing can be done by natural remedies and you must follow the therapies proposed by your doctor based on the type of psoriasis and any other organs involved in the inflammatory process.

add a comment of Psoriasis: causes, types, remedies and nutrition