Paracetamol in pregnancy, counterorder! It could have these side effects on the fetus, the scientists plead in Nature

Paracetamol is one of the few drugs considered "safe" in pregnancy, but now a study has arrived that calls for moderate use

It is one of the few drugs considered "safe" in pregnancy, but now there is a review of the studies that calls for moderate use given the possible endocrine interference with the fetus


Paracetamol (N-acetyl-p-aminophenol (APAP), the active ingredient of over 600 drugs used to relieve pain or to reduce fever - including Tachipirina - should be used in moderation during pregnancy because, contrary to what is commonly think, it could seriously interfere with the development of the reproductive system of the fetus or compromise the liver functions. For this reason, further targeted studies and a series of precautionary measures are urgently needed, both by pregnant women and by doctors. in summary, the conclusion of the declaration of consent signed by nearly 100 doctors and scientists and published in Nature, following a meta-analysis with a complete review of the literature on the subject from 1995 and 2020.

As we read in the article:

This Consensus Statement is the work of an international group of experts, which included physicians (specializing in neurology, obstetrics and gynecology and pediatrics), epidemiologists and basic scientists (specializing in toxicology, endocrinology, reproductive medicine and neurodevelopment). The statement was independently developed by specific companies and colleges by the 13 authors

An article intended to cause discussion and reignite the debate as paracetamol is one of the most commonly used drugs globally in pregnancy, considered a viable option by regulatory bodies such as the FDA or the EMA for use in pregnancy in case of pain or tingling. An "over the counter" drug that can also be found in supermarkets in many states and which is often abused.

On the other hand, in the light of the results of this review, the authors and the signatory scientists believe that "the potential harm deriving from continuous inaction outweighs the harm that could derive from a precautionary action" and therefore call for the urgent start of studies epidemiological and experimental to fully understand the effects of APAP on the development of the fetus.

While recommendations for physicians and the scientific community include:

update of the safety guidelines of the drug in pregnancy by Ema and FDA at the basis of the epidemiological and experimental evidence that emerged;

Obstetric and gynecological associations should review all available research and update their guidelines.

All sales of drugs containing paracetamol, regardless of country, must be accompanied by recommendations for use in pregnancy. This information should include warning labels on the packaging of all APAP-containing drugs. If possible, paracetamol should only be sold in pharmacies (as is currently the case in France, Spain, Sweden, Finland and Iceland).

While these recommendations may not differ materially from the advice currently given to pregnant women, we believe that APAP-specific risk communication between healthcare professionals and pregnant women is warranted due to the high prevalence of use and a widespread perception of negligible risk. The use of APAP should be minimized, but in some situations, such as high fever and / or severe pain, it may be the lowest risk course of action. 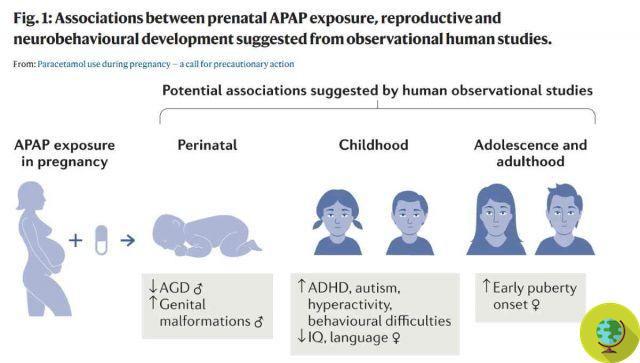 Among the side effects found in the study, scientists are concerned in particular with endocrine ones that can interfere with the correct development of the reproductive system of the fetus, but also of the urogenital and neurological ones.

“We as a society should be able to take protective action when scientific evidence indicates that a chemical is of concern, and not wait for unambiguous evidence that a chemical is causing harm to our children. Evidence of neurodevelopmental toxicity of any kind - epidemiological or toxicological or mechanistic - should in itself constitute a sufficient signal to trigger the definition of priorities and a certain level of action ".

The authors state that they recommend in the conclusions, pregnant women to use paracetamol with caution, at the lowest effective dose. for the shortest possible time.

add a comment of Paracetamol in pregnancy, counterorder! It could have these side effects on the fetus, the scientists plead in Nature