Palm oil: this is what happens to the body by taking it every day

Palm oil. A product with a very strong environmental impact, which is still present in many foods we consume every day and which exposes us to some health risks. But what exactly happens to our bodies when we consume palm oil every day?

Palm oil. A product with a very strong environmental impact, which is still present in many foods we consume every day and which exposes us to some health risks. But what exactly happens to our body taking palm oil every day?


We have talked about palm oil over and over again: we asked ourselves if it is good or bad? We wanted to hear the opinion of some experts and tried to understand the differences between the various types that can be found on the market and which then end up in the products we consume every day.

The first thing to know is certainly that, when we talk about palm oil, we can refer to:

Since only the last two types arrive on our tables, we finally found that certainly it is not a product that we like, it is not healthy, it is not good for the environment and we would like to avoid it as much as possible.

But let's see now health effects of a daily consumption of products with refined palm oil or palm kernel. 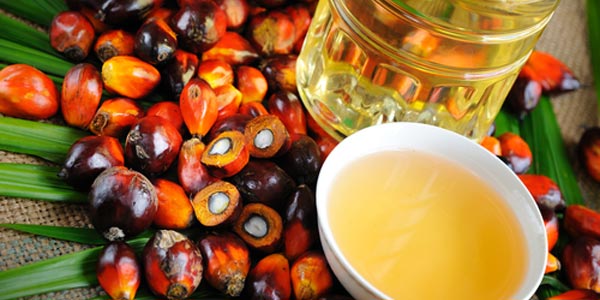 WHAT HAPPENS TO THE BODY BY TAKING PALM OIL EVERY DAY

Beyond the environmental disadvantages, which are absolutely not to be underestimated, there are also some health contraindications continued consumption of this type of fat over time. The problem in fact it is not so much in a sporadic consumption rather in the fact that wherever we turn we find products made with palm oil and therefore we can potentially abuse it without even realizing it (important in this sense to always read the labels).

Palm oil contains high amounts of saturated fat (almost exclusively palmidic acid), which scientific evidence now believes responsible for the formation of atherosclerotic plaques and hyper-production of cholesterol. Therefore the main effect that the consumption of palm oil has in our body is to increase (especially in some subjects already predisposed) the risk of cardiovascular disease. We are obviously talking about refined palm oil which is what is found as an ingredient in most baked goods, certainly not raw palm oil (the red one) which has completely different properties but is very expensive and therefore not tempting the food industry.

Exposes the even greater risks to our health palm kernel, oil obtained from palm seeds which can even contain 85% saturated fat. Also in this case it is a question of exposing oneself to cardiovascular risk more.

The problem, as already mentioned, does not lie in an occasional consumption but rather inintake of saturated fat such as those contained in palm oil which are added to those naturally present in other commonly used products such as the main foods of animal origin (milk and derivatives, meat and eggs). As stated on the website of the Ministry of Health:

In summary, palm oil, when consumed in excess, exposes to:

HOW MUCH PALM OIL WE CONSUME EVERY DAY

According to the latest estimates, the level to which we expose ourselves to this substance reaches much higher levels. The ISS also reports that the adult population consumes about 27 grams per day of saturated fat palm oil contribution estimated between 2,5 and 4,7 grams. And there children from 3 to 10 years old, great lovers of biscuits and snacks, it is no better: they too consume saturated fatty acids between 24 and 27 grams of which palm oil is responsible for 4,4 to 7,7 grams. In both cases, the limit of 10% of total calories from saturated fat is exceeded.

Read also: PALM OIL HURTS: THE FAT OF SATURATED FATS FOR THE INSTITUTE OF HEALTH

However, the ISS claims that the consumption of palm oil:

"It is not related to the increase in risk factors for cardiovascular diseases in subjects with normal cholesterol, normal weight, young people and who at the same time take adequate quantities of polyunsaturates".

Instead, population groups such as children, the elderly, dyslipidemics, obese, patients with previous cardiovascular events, hypertensive "may be more vulnerable than the general population".

Ma in the long run what are the other health risks of our body? The excessive and continued consumption of palm oil over the years would also expose more to the emergence of diabetes mellitus. According to the study coordinated by Dr. Francesco Giorgino, of the University of Bari, palm oil contains a protein (p66Shc) that attacks beta cells and therefore causes insulin production is inadequate.

“The p66Shc protein - explained Professor Giorgino to Adnkronos - is instead a powerful inducer of oxidative stress at the cellular level. It works by promoting the formation of reactive oxygen species, which are capable of damaging and killing cells. It also acts as an amplifier of other factors capable of promoting oxidative stress, such as hyperglycemia in diabetes and an increase in the production of factors involved in inflammation ”.

Read also: DOES PALM OIL CAUSE DIABETES? IT WOULD DESTROY THE PANCREAS CELLS THAT PRODUCE INSULIN
It is then still debated whether palm oil can have it or not carcinogenic effects on our body. In this regard, the AIRC replies as follows:

“Yes, but with a normal diet it is very difficult to achieve the quantities that would actually measurably increase the risk individual to develop a tumor ".

This belief is due to a recent study published by EFSA which reports as also that at temperatures above 200 ° C palm oil and palm kernel develop substances that, at high concentrations, I am genoossiche, that is, they can change the genetic makeup of cells.

THE HEALTH RISKS OF PALM OIL:

So let's summarize what we know about palm oil and health:

• It is still present in too many products

• Children consume 4,4 to 7,7 grams of saturated fat from palm oil every day

• Increases the risk of diabetes mellitus

Read also: PALM OIL, ISS: WE HAVE TO REDUCE IT. AND PAY ATTENTION TO BABY MILK
It must be said, however, that the effect of palm oil on cardiovascular risk as on other types of health risks does not differ much from those of other saturated fats such as butter.

Fortunately, many producers are replacing palm oil with other fats in biscuits, snacks, baked goods, etc. (here is a list of palm oil-free biscuits). This is certainly good for the environment but it may not be the same for our health. They exist in fact several other unhealthy fats and we could find ourselves as already at other times "from the pan to the grill!".

Neem oil: properties, benefits and how to use it for health and beauty ❯

add a comment of Palm oil: this is what happens to the body by taking it every day