Onion and garlic: from nature a help to reduce the risk of stomach cancer 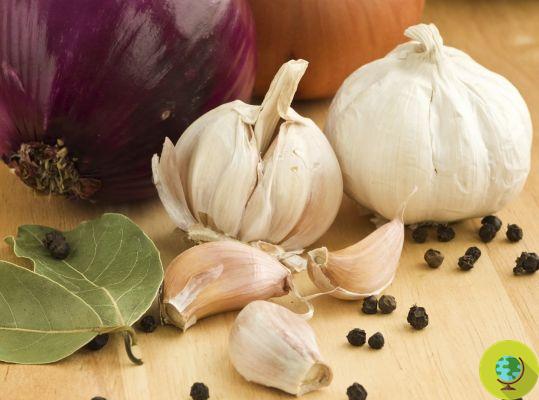 Onion, which has always been more than a food: a real drug. In recent years, science has decided to investigate the properties of the onion and the foods of its own family, such as garlic. Now the researchers have linked the consumption of onions with their protective action on the stomach, referring to serious problems such as cancer.

Onion and garlic, which has always been more than just food: real drugs. In recent years, science has decided to investigate the properties of onion and alimony of his own family, such asgarlic. Now researchers have linked the consumption of onions and garlic with their protective action of stomach, in reference to serious problems such as the cancer.

Lo study was published in the scientific journal Molecular Nutrition & Food Research. It was conducted by the experts of theUniversity of Milan and the Mario Negri Pharmacological Institute. The aim of the study is to provide new epidemiological data and to summarize the evidence on the association between onion and garlic intake and stomach cancer risk.

The researchers came to the following conclusion: the high consumption of foods of the Allium varieties, such as garlic and onions, is able to reduce the risk of gastric cancer. However, the experts are awaiting further scientific data to be able to give definitive confirmation.

The researchers compared the eating habits of 230 people diagnosed with gastric cancer with those of 547 healthy people. They observed that those who consumed at least 2 servings of onion per week, weighing about 50 grams each, had a risk of getting sick of stomach cancer lower than 40% compared to those who did not eat onions.

"To get a more complete view, we also carried out a meta-analysis of the studies reported in the literature and related to more than 10 thousand cases, which confirms the potential protective effects of onions and garlic against stomach cancers" - has explained Carlo La Vecchia, professor of Epidemiology at the University of Milan and co-author of the study.

Along with onions, also the consumption of garlic it turned out to be useful. In fact, the habit of eat garlic every day has been associated with a more than 30% reduction in the risk of gastric cancer. Therefore garlic and onions, and in general foods that contain sulfur compounds, such as leeks, they are useful for cancer prevention and for the slowing down of a bacterium that causes ulcers and gastritis, Helicobacter Pylori. Previous studies they had indicated garlic as a protective food against the risk of colon cancer.

Science especially praises the content of quercetin of garlic and onions. It is a flavonoid from the category of polyphenols that is able to reduce the levels of cholesterol and triglycerides in the blood, a very important factor in protecting the body from cardiovascular risk.

Onions: 10 recipes to enjoy them at their best ❯

add a comment of Onion and garlic: from nature a help to reduce the risk of stomach cancer