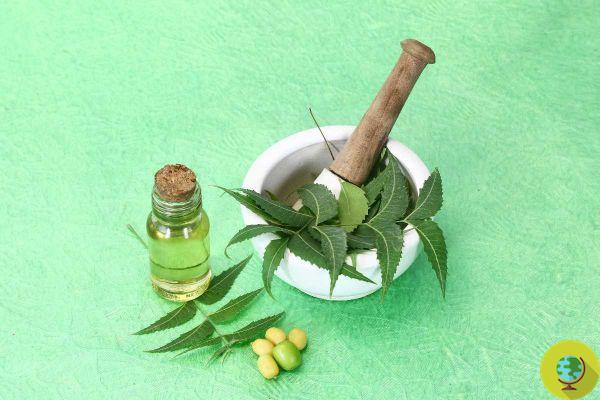 Il neem is one of the best known remedies of the Ayurvedic medicine. A plant with important properties, which is good for the general health of our organism; from its bark to its seeds, leaves and flowers, the whole neem plant has something to offer.

Neem leaves are a concentrate of well-being for our body, able to protect us from various pathologies and problems. Let's discover the 12 science-proven benefits of neem leaf supplements, oils and extracts.

Neem leaves contain powerful antioxidants such as quercetin and nimbolide, which can protect against the damaging effects of free radicals. It is known that i free radicals damage DNA and are the cause of diseases such as diabetes, heart disease and cancer. They also play a role in aging, which is why the use of is often used neem-based supplements with the aim of fighting free radicals.

Diabetes and prediabetes are rampant in the Western world. Neem could be effective in treating what is turning into a veritable global epidemic. According to one study on animals, the administration of neem leaf extract and neem seed oil was able to lower blood sugar. Their effect was comparable to that of an antidiabetic drug called glibenclamide; the study also found that when the animals were treated with the leaf extract or seed oil for 2 weeks, before starting with a chemical that induced diabetes, it contributed to reduce the rise in blood sugar.

They keep blood pressure under control

THEhypertension it can increase the risk of serious conditions, such as kidney failure and heart failure. Neem can help you keep blood pressure levels under control; in fact, different studies on animals have shown that Neem leaf extracts can cause a drop in blood pressure.

They protect the liver

Il liver is a body that works for remove toxins from the body. But harmful chemicals and even some commonly used drugs can cause liver damage; and it is in this case that neem leaves can help. For example, one study found that the extracts of neem leaves protect against liver damage caused by acetaminophen, while another noted that the nimbolide, a bioactive constituent of neem leaves, counteracts the effects of the toxic chemical carbon tetrachloride. Therefore, of the neem leaf juice it may be just what your liver needs to keep fit.

Le intestinal ulcers they can leave you with a burning pain and symptoms, such as indigestion and heartburn. But neem might be able to help you. Indeed, one study found that theneem bark extract is able to reduce gastric acid secretion by 77% and heal almost completely duodenal ulcers. A glycoside present in neem cortex is thought to be primarily responsible for its anti-ulcer properties, and its ability to control gastric acid secretion.

Traditional medicine uses neem for have been treating cancer for centuries; it was found that the extracts of seeds, flowers, leaves and fruits of neem have anticancer and chemopreventive effects in various types of cancer. It is believed that components such as nimbolide e azadirachtin, are responsible for many of the anticancer properties of neem, which has the ability to induce cell death, inhibit cell proliferation and increase the immune response against cancer cells. Interestingly, research shows that neem may also allow certain cancer drugs to work more effectively. Remember, however, that this plant cannot replace conventional cures and treatments.

Long before toothbrushes came into common use, some communities in Southeast Asia used to chew neem sticks to keep teeth clean. Neem stick extracts have been found to reduce the ability of some streptococci to colonize tooth surfaces. Hence, chewing on neem sticks can help control plaque and prevent tooth decay.

I topical remedies involving neem leaves and oil, should only be used after having an allergy test done. The reason? Neem oil is very strong, so it is good to always use small quantities and diluted with a carrier oil in a ratio of 1:10. Creams and ointments with extracts or neem oil will be calibrated so that you can use them safely.

THEdiluted neem oil has been used for centuries as a remedy for skin infections, as its components have antifungal and antibacterial properties and can be useful in eliminating an infection. Neem leaf extracts have also been found to show antifungal properties against organisms that cause skin disorders, such as Tinea versicolor.

La dandruff it's an annoying problem we've all had to deal with, but neem leaves could be the solution; in fact, the search shows that the neem leaf extract acts against the smell malassezia which is associated with dandruff.

Boil a handful of neem leaves and strain the solution after it has cooled. Use this water for rinse the scalp, and hair after shampooing. You can also apply one ground neem leaf paste and mix with a little water; leave it on for 15 minutes for it to work its magic and wash off.

A common inflammatory skin disease, the Psoriasis leads to scaly, thick and reddish lesions. Neem leaves can also help treat this ailment; in fact, one study found that when people on a conventional regimen were given neem leaf extract, they showed a better and faster response than those who were given a placebo.

To combat pimples, grind some neem leaves with a little bit of turmeric powder, which is another natural ingredient with anti-acne properties. Apply this paste on the pimples and wash it off after it dries. Neem extract works against bacteria such as P. acne and S. epidermidis which play a role in acne development.

Neem oil can be used as natural repellent for mosquitoes. A study found that applying 1 to 4% neem oil diluted in coconut oil offers 81-91% protection against mosquitoes that transmit malaria. So, if you are looking for a natural mosquito repellent, get one with neem oil; you can also dilute a drop or two of neem oil in shea butter and use it on the skin after a patch test.

How to use Neem

Here's a look at how to take advantage of the numerous beneficial properties of neem:

Also remember to always do a patch test before using it topically, as some people can have an allergic reaction.

Sull 'neem oil could it be interesting for you:

add a comment of Neem leaves, an ancient and powerful natural remedy: the 12 greatest benefits