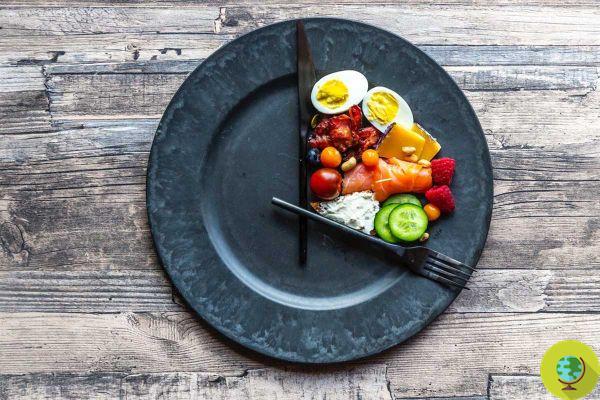 Some nutritionists advise against consuming certain foods such as bread, ice cream, milk chocolate or salty snacks after 16 pm

Those who want to lose weight should be careful about what they eat, how much they eat but also the times in which they eat certain foods. Some experienced nutritionists recommend avoiding 4 foods in particular after 16pm.


While previously, those who were about to follow a diet aimed at weight loss, were mainly advised what to put on their plate and not to overdo the portions, now the chrononutrition it is becoming more and more important. In fact, among the fundamental factors to consider when we eat there is also the time in which certain nutrients are consumed.

In general, those who want to lose weight should avoid foods high in saturated fat or refined carbohydrates high in calories, preferring whole, fresh and healthy foods instead. But there are some foods to avoid in particular after a certain time in the afternoon.

According to some expert nutritionists, 16 hours in particular would be the key moment of the day after which it is absolutely necessary to stop eating 4 foods that are enemies of the diet.

Chronodiet: how it works, weekly menu scheme, what to eat and CONTRAINDICATIONS

As stated by the nutritionist Helen Bond:

“As a general rule, it is best to avoid processed and refined foods. In addition to being high in saturated fat, sugar and / or salt are often low in nutrients and loaded with calories, which makes it difficult to control our weight. "

For this reason, Bond points out that we shouldn't never eat white bread after four in the afternoon. The reason is his high glycemic index (GI), a system that classifies foods that contain carbohydrates and reveals how those with a high glycemic index can increase sugar and insulin levels.

In addition, white bread has a low fiber content, so it does not fill us up or prevent us from eating more.

The second food that we need to eliminate from our diet after 16pm is the ice cream.  The reason is mainly that it is loaded with sugar and carbohydrates. According to nutritionist Edwina Clark:

"Ice cream is a high carbohydrate food and eating a lot of refined carbohydrates causes a build up of abdominal fat."

To be avoided absolutely also the savory snacks, first and foremost potato chips, which are rich in saturated fat, refined carbohydrates and salt. These kinds of snacks provide us with a lot of calories, they do not fill us up and as a consequence we will have a greater difficulty in losing weight. Experts suggest replacing them with healthier snacks such as nuts or fruit.

Finally, milk chocolate should be avoided. Rich in sugar, it can also contain a lot of fats. Much better to opt for dark chocolate as it has a much lower amount of sugar and fat and offers several health benefits derived from its natural antioxidants.

Dr. Bond points out reminds us not only of the importance of eating healthy but also of chewing slowly:

"When hunger strikes, it's interesting to try healthy snacks and eat them slowly, instead of devouring high calorie products."

Fruit, nuts, seeds or wholemeal bread alone or accompanied by equally healthy products such as an avocado sauce, chickpea humus or other, are the best solution to feel satisfied and full. And the scales will thank you too.

And if you feel like it, after 17pm you can also avoid eating until 8am the following morning as suggested by the evening fasting diet.

Evening fasting diet: how it works, what to eat and contraindications

If you really want to lower your high blood pressure, you need to eliminate these unwanted foods from your diet ❯

Green tea: the extract acts on cancer cells by blocking their metabolism

add a comment of If you want to lose weight, eliminate these foods starting at four in the afternoon