If you really want to lower your high blood pressure, you need to eliminate these unwanted foods from your diet

In an infographic, the American Heart Association reminds us of 6 foods in which large amounts of salt are hidden

Sufferers hypertension he must pay particular attention to the amount of salt he takes every day but even those who do not have this problem should limit the sodium in their diet. This is not always easy, since salt is hidden in many commonly used foods. The American Hearth Association reminds us to be careful by reporting "the salty six“, 6 foods that are really too high in sodium.


There are several factors that increase the risk of developing hypertension, one of these is undoubtedly exceeding the amount of salt taken with the diet. It is now known (although we often forget it) that this ingredient is hidden in various foods and even in the most unsuspected drinks (for example hot chocolate).

To warn of the risks of consuming particularly salty foods too often, especially if you already suffer from high blood pressure, is the American Heart Association who dubbed 6 foods to watch out for "the salty six".

But what foods are we talking about?

The 6 foods rich in salt

The American Heart Association recalls that some foods that are consumed daily (or almost) have a huge impact on the daily sodium intake. In addition to telling us what they are, it also provides useful tips to replace them, at least in part, thus avoiding taking too much salt.

The American Association recommends do not exceed the limit of 2,300 mgs (better less) of salt per day. But it is easy to overcome it if you consume: 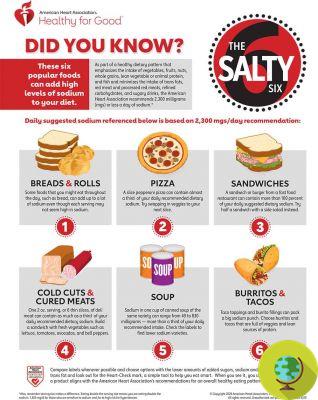 Harvard had also compiled the same list by quantifying the salt contained in these foods:

For each food you buy, it is always good to read the labels to be able to choose the options with the lowest quantities not only of salt but also of sugars and saturated fats.

It is also recalled that portion sizes also make a differenceto. Eating a double serving also means getting double the sodium, thus exposing you to a higher risk of hypertension.

We try however to consume as little packaged food as possible, preparing bread and pizza at home when possible, in order to best dose the salt.

Among other things, there are excellent systems for replace the salt in the kitchen, we had suggested some of them in this article.

If you always wake up at this time of night it could be a sign of an emotional block (or a problem with the intestines). ❯

add a comment of If you really want to lower your high blood pressure, you need to eliminate these unwanted foods from your diet