Green and sprouted potatoes: here's why not to eat them. The BfR warns about the risks 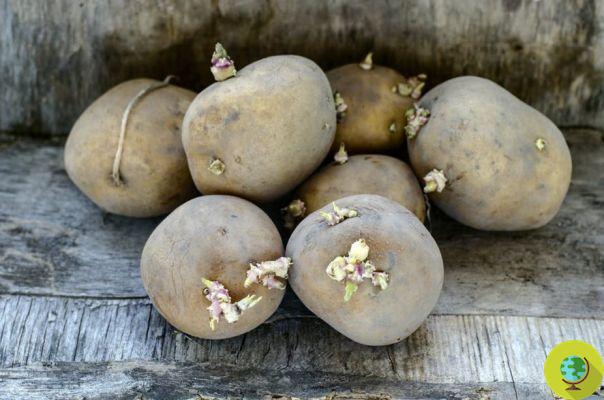 The German Federal Institute for Risk Assessment draws up a vademecum for eating "safe" potatoes.

Too green or too sprouted potatoes risk poisoning the body due to the too high presence of solanine. In addition to grandmothers, the warning from the German Federal Institute for Risk Assessment comes to warn of the danger


They are rich in potassium, vitamin C and complex carbohydrates and are also valid allies against diabetes, anti-inflammatory and energy: potatoes are one of the most popular vegetables at the table because they are very versatile and easy to combine. But there are certain cases where they could be toxic. When should potatoes not be eaten?

The German Federal Institute for Risk Assessment (BfR) reviewed in a study the danger associated with the ingestion of so-called glycoalkaloids, in particular solanine which forms in potatoes when they are green and full of sprouts (but also when they become old, wrinkled and spongy, it means that the solanine inside them is increased).

Just like green tomatoes, but also like aubergines or quinoa, potatoes may contain too high amounts of solanine, the presence of which increases when they are in the sprouting phase and when their skin is green. That is why you should avoid eating raw potatoes, green potatoes and limit the consumption of sprouted potatoes.

If taken in excess, solanine can cause nausea, vomiting, irritation of the gastric mucosa and sometimes fever. Rarely, in severe cases, there may be loss of consciousness, alterations in brain, respiratory and cardiac functions.

According to the BfR, solanine should not exceed 100 mg / kg of fresh potatoes. The value was halved compared to the previous threshold of 200, limiting the tolerable dose to 0,5 mg for each kg of body weight.

To keep glycoalkaloid intake as low as possible, the BfR has compiled a sort of vademecum on the following standard recommendations relating to the storage and preparation of potatoes:

Here you find all the precautions to take into account when cooking potatoes.

New potatoes: the recipe in a pan to make them crunchy and golden ❯

add a comment of Green and sprouted potatoes: here's why not to eat them. The BfR warns about the risks