Graviola: in its acetogenins the key to preventing cancer? 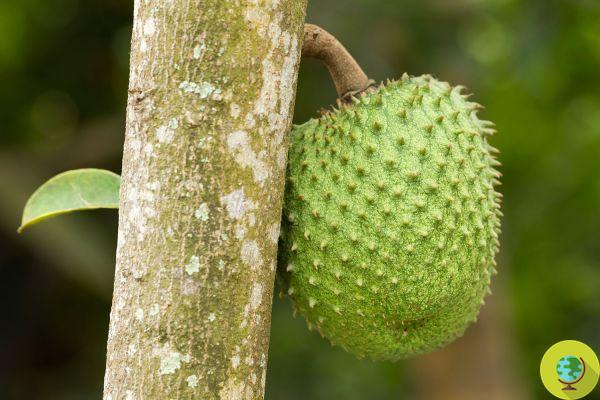 A Mexican study is evaluating the anticancer effects of acetogenins present in the pulp of Graviola. If the research is successful to encourage the use of this fruit, yogurt, ice cream, juices, etc. will be produced.

La Graviola (Annona Muricata) it is a plant that in recent years is often talked about in particular for its potential anti-cancer virtues on which various scientific researches are focusing. Could this fruit actually contribute in some way to the cure or prevention of this disease?


The studies already carried out have concentrated on analyzing the properties of Graviola and in particular of its leaves, roots, seeds and peel, but the pulp has always been left out. Now Dr. Efigenia Montalvo with her research team from the Technological Institute of Tepic, in the state of Nayarit (Mexico), is dedicating herself to analyze the pulp of this fruit in its natural state and after being frozen to see if it also contains possible anticancer compounds.

The idea is that of increase the consumption of Graviola in Mexico where, despite being a local fruit, it is not highly regarded. In this way, according to the scientists, a kind of cancer prevention campaign would be carried out. Here then, if this research is successful, parts of the white pulp of Graviola could be inserted into yoghurt, sweets, juices and other products.

Research is currently analyzing the presence of acetogenins in an ice cream made with yogurt and fruit. The first conclusions are that the freezing and storage of the fruit does not affect the presence of acetogenins even after one year. We focus in particular on these substances considered anticarcinogenic because cancer is a disease that is also increasing among the Mexican population and some scientific research has shown that a compound based on this fruit is useful for "encapsulate tumors"Even if in reality everything would depend on the concentration of the acetogenins present.

The second phase of the research aims to isolate the acetogenins found in fruit juice and nectar treated with ultrasound, identify its structure and therefore learn more about the chemical effects they have on cancer cells.

- Graviola: benefits, uses and where to find it

- How to grow Graviola from seed (Annona muricata)

- Graviola: contraindications and side effects

Pregnancy: vegetarians or not, the important thing is to eat well ❯

add a comment of Graviola: in its acetogenins the key to preventing cancer?