French fries: This is the exact amount to eat without side effects, according to a Harvard professor 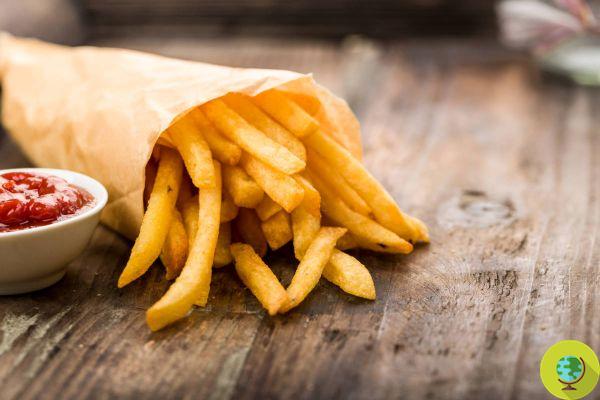 Is there an ideal serving of French fries? According to a Harvard professor, yes and it would be limited to an exact and small number

Is there a way to eat French fries without harmful health consequences? According to a Harvard professor, yes and that would be to limit the quantity to an exact number, how small: 6. Americans hit in the heart (and stomach) arise: what sense can it have to eat such a miserable portion?


French fries are a whim that is difficult to give up, if prepared at home with quality oil and sporadically they are not completely demonized since, like the rest of well-made fried foods, they stimulate the functionality of the liver. The fries on the market, however, are very different and undoubtedly there is the risk of overdoing the consumption taken by greediness.

Eric Rimm, a nutritionist at Harvard University, wanted to speak on the subject, who in a broader discourse on French fries argued that the ideal portion would be only 6 chips, the rest should be replaced with a salad. As reported by the New York Times:

“French fries are a 'starch bomb' that turns into sugar quickly in the blood. I think it would be better if the main course came with a side dish of 6 chips and a salad ”.

The statement struck the heart of the American people who usually consume avalanches of potato chips accompanied by liters and liters of carbonated drinks. Consumers accused Dr. Rimm of wanting to take away the pleasures of life. But you shouldn't be so angry with the Harvard professor when you understand what's at the basis of his speech.

In the United States, potatoes are the most consumed vegetable (not actually a vegetable!). A vegetable which, however, fried and eaten in large quantities is certainly not healthy, also due to the high glycemic index.

A study published in recent years in the American Journal of Clinical Nutrition had pointed out that potatoes have a high glycemic index, which has been linked to an increased risk of obesity, diabetes and cardiovascular disease. The research found that participants who ate fried potatoes two or three times per week had a higher risk of mortality than those who consumed potatoes otherwise.

Rimm's provocation was therefore simply to mean and advise: reduce the consumption of fries in favor of healthier raw vegetables (like a salad) or even cooked but in a different way from frying.

It is difficult to change the mentality of the Americans in this sense, but here it is certainly simpler. Our advice? Forget the 6 fries and the salad, eat well every day and occasionally allow yourself, if you like, an exception to the rule as it should be: a nice portion of homemade fries with good oil and not reused and maybe limiting a little ' salt.

Or, to limit the glycemic load, you can choose alternative chips made with other vegetables.

'Healthy' and 'handmade' industrial chips: it is false advertising. Companies fined by the Antitrust ❯

add a comment of French fries: This is the exact amount to eat without side effects, according to a Harvard professor