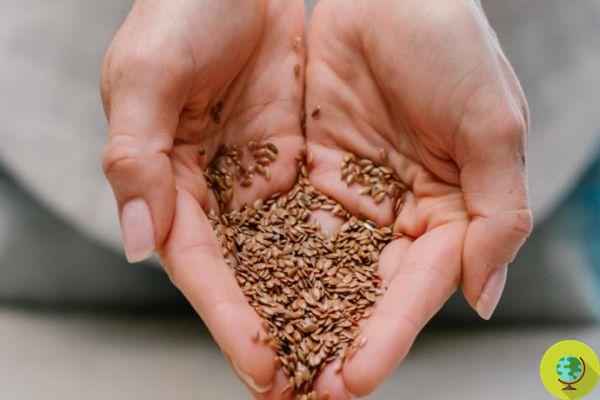 Flax seeds are as effective as hormone replacement therapy (HRT) in reducing the typical symptoms of menopause but in addition they have the advantage of having no side effects and improving the quality of life in general. These are the results of a clinical study conducted in Turkey.

I flax seed they are as effective as hormone replacement therapy (HRT) in reducing symptoms typical of menopause but they also have the advantage of having no side effects and improving the quality of life in general. These are the results of a clinical study conducted in Turkey.

Menopause is a physiological change that accompanies women in a certain period of life, that is when their reproductive capabilities are interrupted and consequently menstruation completely disappears. Unfortunately, in most cases, this period is particularly delicate and women are faced with annoying symptoms such as:

Underlying most of these symptoms is the fact that less estrogen is produced during menopause. Each woman reacts in a very personal way but many seek help from doctors to find a therapy that can alleviate the discomfort. In several cases hormone replacement therapy is prescribed which, however, is not free from contraindications and from the risk of side effects, even serious ones, such as the appearance of heart disease and inflammation of various types.

A clinical study, conducted by researchers from the departments of nursing and pharmacy of the University of Izmir Katip Çelebi in Turkey, sought to compare the effects of hormone replacement therapy (HRT) with those of flaxseed.

To do this, the experts studied the symptoms of menopause in 140 volunteer women who had not menstruated for at least a year. The women were divided into four groups of 35 participants each. The first and second groups did not take HRT but 5 grams of flaxseed per day (one tablespoon equals about 11 grams) every day for 3 months. The only difference between the first and the second group was that the latter, in addition to flax seeds, followed an information path on menopause.

The third group had received physician-prescribed hormone replacement therapy which consisted of 2 milligrams of estradiol hemihydrate and 1 milligram of norethindrone acetate per day. There was also a fourth control group that did not receive any treatment.

The assessment was made considering the Menopause Rating Scale (MRS) which takes into account various parameters including intensity and frequency of symptoms. However, the Quality of Life Scale was also considered, an important test that has existed since 1987. The tests were done at the beginning of the experiment and after 3 months. The scores were finally analyzed and evaluated by a computer that carried out a statistical analysis of the results.

It was thus seen that flax seeds are on a par with hormone replacement therapy in terms of efficacy against the symptoms of menopause. After three months, the researchers found that the first two groups reported fewer symptoms, while the fourth group, the one who had not received any treatment, had an increased risk.

Women who had taken hormone replacement therapy drugs also had fewer menopausal symptoms, the reduction was always about 10%. The result, therefore, between HRT and flaxseed would be the same were it not for the latter remedy to prevent women from a series of possible side effects related to taking drugs but not only ...

The benefits of flax seeds

While HRT and the use of flaxseeds against menopause symptoms have essentially been tied, the latter have some added benefits.

It is the scores of the texts relating to the quality of life that reveal the advantages of flax seeds over hormone replacement therapy. The first group's score was 49, the second 41,69 while the TOS group recorded a 34,65 and the control group 33,82. Among other things, while the results of the groups that had taken flax seeds compared to before had increased, the opposite was true for the group that had followed the classic drug treatment.

Then there is the matter of side effects, as already mentioned those who take HRT are more likely to risk inflammation, irritation, cardiovascular disease, nausea, headache and other side symptoms. Flax seeds, on the other hand, lower inflammation and have beneficial effects on the intestines, stomach, brain and reduction of bad cholesterol.

So let's remember more often to include flax seeds in our diet and not just during menopause!

Grapefruit seeds: properties, uses and where to find the extract ❯

add a comment of Flaxseed better than Tos drugs to reduce menopause symptoms. I study