Extra virgin olive oil maintains its antioxidant properties even after cooking. I study 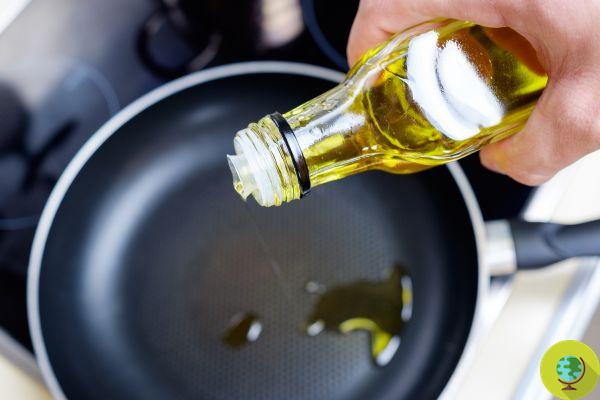 Olive oil maintains levels of antioxidants considered healthy even when cooked (a typical technique, among other things, of Mediterranean cuisine).

THEextra virgin olive oil, as we know, it has formidable qualities when eaten raw. But it does not mean that, if used for cooking, it loses all its antioxidant properties. This is the thesis of a new Spanish study, which has in fact demonstrated how this type of oil maintains levels of antioxidants considered healthy even when cooked (a typical technique, among other things, of Mediterranean cuisine).


In the work published by the journal Antioxidants, a team of researchers from the Faculty of Pharmacy and Food Sciences of the University of Barcelona, ​​together with the Centro de Investigación Biomédica en Red de Fisiopatología de la Obesidad y la Nutrición (CIBERobn) and the University of San Paolo, simulated the cooking conditions of a home kitchen to determine how home cooking affects polyphenols extra virgin olive oil.

Extra virgin olive oil is the main source of fat in the Mediterranean diet and has a unique composition of fatty acids with a higher antioxidant content than other edible oils. Its health benefits are mainly attributed to these components, which are polyphenols.

For this work, the researchers simulated the cooking conditions of a domestic kitchen (different from an industrial one), to determine how this could affect the polyphenols of extra virgin olive oil. To this end, the effects of time - for a short and long time - and of temperature - at 120 ° C and 170 ° C - on the degradation of antioxidants were investigated.

The results show that during the cooking process, the polyphenol content decreased by 40% at 120 ° C and 75% at 170 ° C compared to the antioxidant levels of raw oil. Conversely, cooking time would have an effect on some individual phenols, such as hydroxytyrosol, but not on the total phenol content.

These are levels of antioxidants that, say the researchers, still continue to meet the parameters that the European Union considers healthy:

"Despite the decrease in the total concentration of polyphenols during cooking, this oil has a level of polyphenols that reaches the health claim according to European legislation, which implies properties that protect the LDL cholesterol particles from oxidation," stresses Julián Lozano. , first signatory of the research, in the press release of the Spanish University.

This would reinforce the idea that Mediterranean cuisine can bring health benefits not only to the recommended food, but also to the way it is cooked. According to the authors, the goal now is to analyze the effects of cooking with virgin olive oil with other food matrices, such as legumes or meats.

add a comment of Extra virgin olive oil maintains its antioxidant properties even after cooking. I study