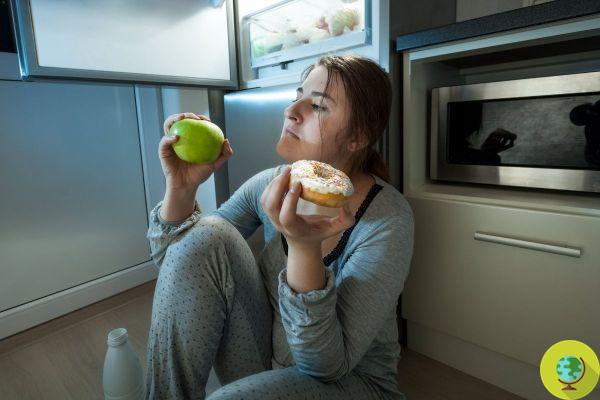 Eating too late in the evening, or even having a snack at night, can have serious consequences on our health.

Eating too late in the evening, or even having a snack at night, can have serious consequences on our health. Let's see which ones.


The hectic life in which we are immersed often leads us to eat in an irregular way, without respecting fixed times - and this is how often, perhaps, we end up eating too late in the evening or we find ourselves staring at the refrigerator late at night in search of the so-called 'midnight snack'. Unfortunately, not having the right food clock and compulsive eating at any time of the day (and night) is highly damaging to our health, and for several reasons.

First, consuming calories and fat just before bed can strain our metabolism, which is not the material time to 'burn' what we ate. A recent study, in fact, has highlighted how those who eat late in the evening burn less fat during the night than those who dine earlier, with the same caloric intake and physical activity practiced.

Another research has shown that people who eat dinner at 22.00pm instead of 18.00pm are more likely to develop glucose intolerance and reduce the rate of fat oxidation, thus increasing the risk of obesity and other metabolic diseases. In addition, the risks of running into health problems such as high blood pressure, diabetes, high cholesterol and triglyceride levels (conditions that can lead to stroke or heart attack), as well as the possibility of starting to suffer from dyslipidemia they are higher if you eat too late in the evening.

(Also Read: Here's Why You Should Never Dine Late At Night According To The Nutritionist)

But it's not just the metabolism that is affected by the effects of the midnight snack. The quality of our sleep is also affected if we eat too late. A study conducted a few years ago, in fact, demonstrated a close connection between the dinner time and the onset of sleep disorders such as difficulty falling asleep, reduction of REM phase, insomnia. So eating badly (and at the wrong times) also hurts our rest and negatively affects our performance the next day, making us tired, unresponsive, unproductive.

Eating out often increases phthalate levels in the body ❯