Does eating carbohydrates at dinner make you fat? Here's what the science says 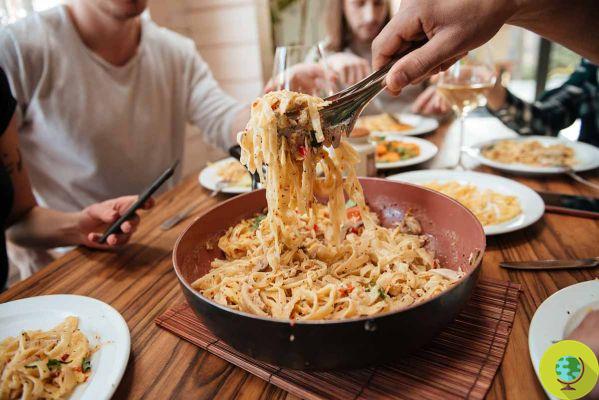 Many people are convinced that eating carbohydrates in the evening is a bad habit, which leads to gaining weight. But is it really so?

The belief that eating carbohydrates in the evening is a bad idea for the figure is hard to die for. Many people who are on a diet, or who perhaps want to maintain their weight, limit themselves by excluding bread, pasta, rice or other types of foods with a high carbohydrate content from dinner.


This deeply rooted idea, however, is nothing more than one of the false myths (among the hardest to die) concerning nutrition, also denied by the Higher Institute of Health, on whose website we read that:

This is a mistaken belief: it does not matter at what time of day we eat carbohydrates, but rather how many are introduced daily and how many total calories our diet consists of.

And it is then specified that:

For a balanced diet, it is certainly important not to eat more than you should and be careful to consume them in portions appropriate to your body, age and physical activity. It is also good to have some precautions, for example to avoid elaborate condiments for first courses, therefore richer in fat and difficult to digest. However, the belief that carbohydrates should be excluded from the diet, or that it is better to eat them during the day and not in the evening, is groundless.

Not only does it not hurt and does not make you fat to eat carbohydrates in the evening but even, for example, consuming a plate of pasta or rice (not overdoing the portions), can prove to be an excellent solution to deal with a series of ailments including insomnia. .

This was demonstrated by researchers from Brigham and Women Hospital in Boston in a study a few years ago. Read also: Pasta for dinner: relaxes, reduces stress and does not make you fat. Dispelled the myth!

And the ISS itself confirms this:

For those who have difficulty sleeping at night, a carbohydrate-based dinner seems to favor night rest, stimulating the production of serotonin (the molecule of well-being) useful for going to sleep more relaxed and satisfied. In reality, carbohydrates do not necessarily make you fat and this does not change according to the time in which they are consumed: you get fat mainly due to an excess of calories introduced and an incorrect distribution of nutrients compared to the body's needs. If you eat more than necessary, the increase in body fat is independent of the composition of the diet: in fact, the total calories count.

So, rather than thinking about not eating carbohydrates in the evening which, as we have now understood, is a senseless belief, let's focus rather on how much and how to eat (for example, it is a good habit to chew slowly) as well as on the quality of foods (always better wholemeal and organic).

A good habit is also not to eat dinner too late. Also read: Here's why you should never have a late dinner according to the nutritionist

add a comment of Does eating carbohydrates at dinner make you fat? Here's what the science says