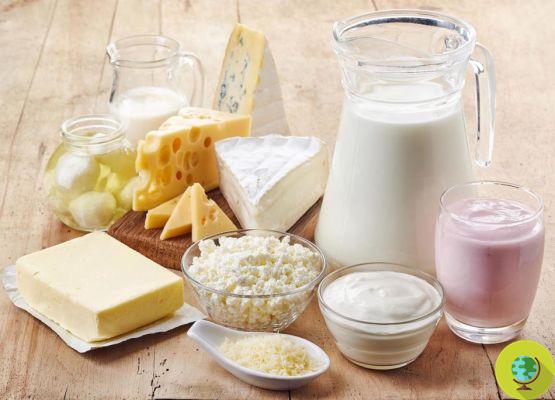 Are milk and cheese good or bad for your health? This is one of the hottest topics in terms of nutrition and on which there are absolutely conflicting opinions. Now new research wants to clear milk and derivatives from the common opinion that these foods make you fat. Quite the contrary, scholars argue, dairy products would even make you lose weight!

Milk and cheese are they good or bad for your health? It is about one of the hottest topics in nutrition and on which there are absolutely conflicting opinions. Now new research wants to clear milk and derivatives from the common opinion that these foods make you fat. Quite the contrary, scholars argue, dairy products would even make you lose weight!

The study, conducted at the University of Science and Technology of Qingdao (China) and published in the Annals of Epidemiology, analyzed the data of more than 30 previous searches. It is therefore a meta analysis, or a review of data obtained by scholars scattered all over the world who have evaluated the relationship between milk consumption and the onset of obesity.

Read also: MILK: A BENEFICIAL FOOD OR TO AVOID?
The unexpected result sees milk as a possible solution to the obesity problem. What do you mean? According to the authors with 200 grams of milk consumed per day, children and adults can see reduce the risk of obesity by 16%.

It seems that the researchers are convinced that to act positively on the waist is the presence of calcium which, if taken in the right quantities, would help to implement a series of metabolic reactions in our body aimed at preventing fat from being absorbed and therefore promoting weight loss.

Even though the research results say this, we still want to point out that it seems unlikely to us that we can solve the problem of obesity by increasing the intake of milk and dairy products given that, as nutritionists often point out, overweight is not magically defeated with just one food or drink (and not even with miracle pills) but by doing good nutrition education as well as regular physical activity.

There has even been research that has speculated that the cheese (probably due to the casein) you create dependence (rather curious then to think of acting on the problem of obesity with a food that tends to make one become addicted!).

Given that calcium is beneficial and promotes weight loss, it would not be conceivable enjoy the same benefits by using eg calcium of vegetable origin?

add a comment of Do milk and cheese really fight obesity?