How many times do we drink from a can or consume food that has been in contact with aluminum? Well, a new study warns of the risks of these widespread habits. In fact, experts have linked exposure to aluminum to a new side effect for the human brain.


Aluminum has been talked about several times as a dangerous substance for our health, now new research confirms that this metal can be harmful to long-term health, particularly that of the brain.

The British scientists who conducted the study, published in the Journal of Alzheimer's Diseases, wanted to investigate how exposure to aluminum can affect people's genetic predisposition to various forms of dementia, including Alzheimer's.

Previous research has already hypothesized that the aluminum present in everyday products, such as deodorants, may be associated in some way with neurodegenerative diseases and forms of dementia.

The new research therefore focused precisely on this aspect, examining the presence of aluminum in the brains of donors with a family history of Alzheimer's.

The analysis showed that the very small traces of aluminum that can enter our body, for example when we drink from a can or if we have wrapped a sandwich with this material, can cause serious damage to our cognitive function in the long term.

Read also: Do ​​not wrap your children's sandwiches in aluminum, even the Ministry confirms the risks of migration

The researchers indeed found that aluminum was present in the same areas of the brain where protein tangles are found That appear in the early stages of Alzheimer's. The study also showed how aluminum itself could play a role in the formation of such tangles and plaques that precede the onset of Alzheimer's. 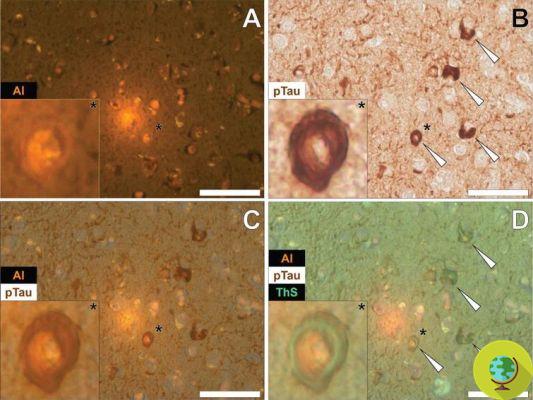 Quite a shocking discovery (although to be confirmed with further research), considering the exposure we all have to this material. The researchers also pointed out that one reason for aluminum's effect on dementia could be that, as we age, our kidneys become less able to filter this substance out of the body, which could lead to an accumulation in the brain.

Limiting exposure, therefore, could be fundamental and, considering how many drinks are packaged in aluminum cans, it seems that it would be much better (but we already knew it) to opt for glass.

The secret of longevity discovered in a small worm: will we live to 500 years? ❯